Jeff Malec here. The family and I moved our work from home to remote site work from home for a bit here in August, driving out to Colorado and Utah to get some outdoor time in the afternoons while working in the mornings. One of the afternoon adventures was rock climbing in Ouray, CO (as pretty a place as you’ll ever find, if you get the chance to visit). Here’s a pic: 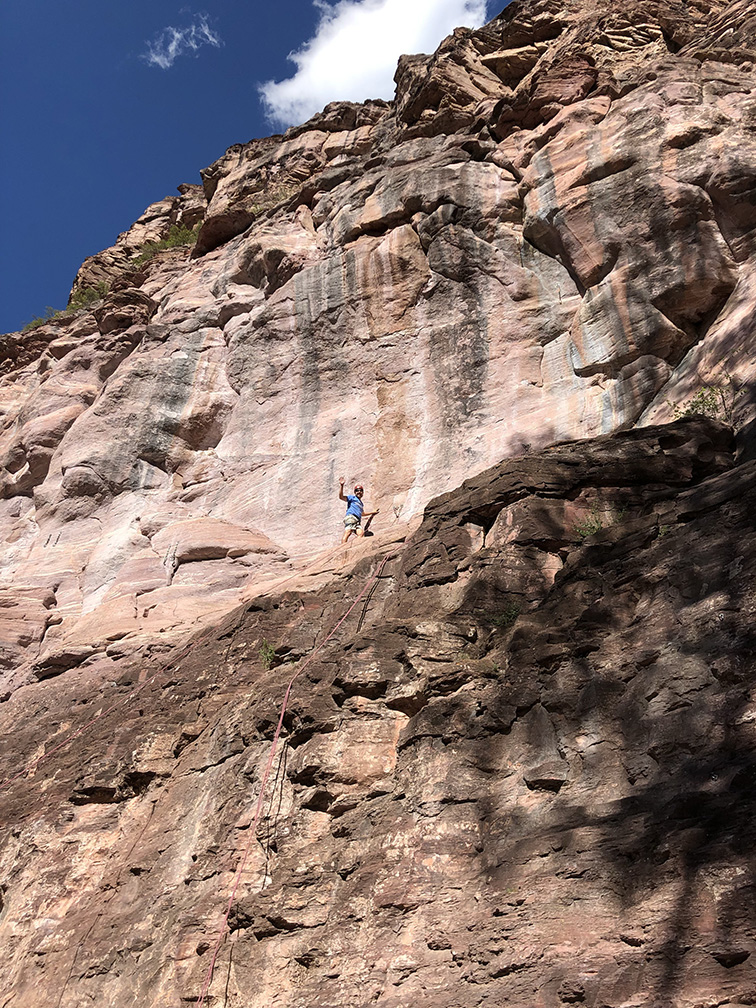 Luckily (for you) we’re not turning this into a family picture blog. No, this bit of personal background is just to say that the sport of rock climbing had me thinking about risk in a big way. But not in the simplistic, rock climbing is risky way. No, it was more in the rock climbing has figured out how to control risk as much as you desire way, much like professional hedge fund managers and trading firms. Rock climbing, like the trading world (despite what Dave Portnoy says), is inherently a risky endeavor. Fall off a 100-foot rock face, you’re probably going to die. Short Tesla as it rips up $1,000/share and you’re probably going to severely kill your portfolio.

You need risk controls to make sure a mistake isn’t your last mistake. In rock climbing, with kids, that meant the professional going 50 feet up (on ropes) and securing our lines into chains drilled into the rock (two of them, btw, as a backup protocol), that meant a fail-safe auto-locking belay device in case the guide faints or gets knocked out by a rock, that meant learning commands to communicate any problems (like yelling rock for when the climber knocks a rock loose, sending it down towards those supposedly not at risk). Perhaps nowhere more in sport are the activity and the risk control so separated. The act of climbing itself has nothing to do with ropes, cams, carabiners, harnesses, helmets, and so forth. That is all for the risk control. Indeed, you can do all of this without the risk control devices, just as Alex Honnold famously did free soloing El Capitan in Yosemite, but he is maybe the sole being in the universe who would accept that as an acceptable risk.

Which brings us back to trading and the investment world – where the ropes and helmets and harnesses of risk control are stops and diversification and position sizing. They typically have nothing to do with the ‘sport’ itself. You can make much more money not being diversified, not using stops, or going all in on a high conviction trade. Of course, you could also blow up. In rock climbing, the primary goal isn’t to get to the top of the rock face, it is to live to climb that rock face another day. The secondary goal is the sense of achievement of getting to the top. In trading, the primary goal should likewise be to come back the next day, the next year, and the next decade. It should be to survive any down drafts with proper risk controls in place so you can return the next day, month, or year. And here’s where it separates from climbing, because there’s no infinitely high rock face out there. Besides perhaps some non-linear facet to the overall enjoyment and sense of achievement you get form doing hundreds of climbs without a fatal one, you’re not compounding your success.

In investing, each successful ‘climb’ allows you to use those now higher assets to feed the next successful “climb”, compounding onward and upwards. A major slip or fall seriously injures that compounding. If you have no risk controls, you could ‘die’, falling all the way to the bottom. The better risk controls or the more active and instantly on your diversification is – the smaller your drop and the easier it is to climb back up to your previous level.  That’s what it’s all about. Having the least restrictive ropes possible which allow you to climb as high as you care to, while keeping any falls you encounter as small as possible. That’s the holy grail we’re all searching for with diversifying strategies as are outlined here.

To have an investment or asset allocation strategy is to do that El Capitan climb every day, night and day, rain or shine, snow or sleet, for the rest of your life. It’s doubtful even Alex Honnold would take on that risk. Surely, you want some ropes and safety protocols and backup plans in that scenario. It’s a long way down.