The CME is on a rolllll, launching their second new product in recent months (right behind the micro E-mini). In their words “…..in response to interest in cryptocurrencies and customer demand for tools to manage bitcoin exposure, CME options on Bitcoin futures (BTC) are now trading.” Many would say you can’t really have a successful futures contract without options on those futures, and that’s exactly what the Bitcoin futures options are based on, the CME’s Bitcoin futures which launched November 2017.

“CME’s Bitcoin futures contract, ticker symbol BTC, is a USD cash-settled contract based on the CME CF Bitcoin Reference Rate (BRR), which serves as a once-a-day reference rate of the U.S. dollar price of bitcoin. The BRR aggregates the trade flow of major bitcoin spot exchanges during a one-hour calculation window into the U.S. dollar price of one bitcoin as of 4 p.m. Greenwich Mean Time (GMT).

A single BTC contract has a value of five times the value of the BRR Index and is quoted in U.S. dollars per one bitcoin. The tick increments are quoted in multiples of $5 per bitcoin, meaning a one-tick move of the BTC future is equal to $25.” CME

The timing doesn’t seem to be coincidence, either – with Bitcoin having seen its best start-of-the-year since 2012, and large open interest holders and the amount of open interest (5,328 contracts) both hitting records. 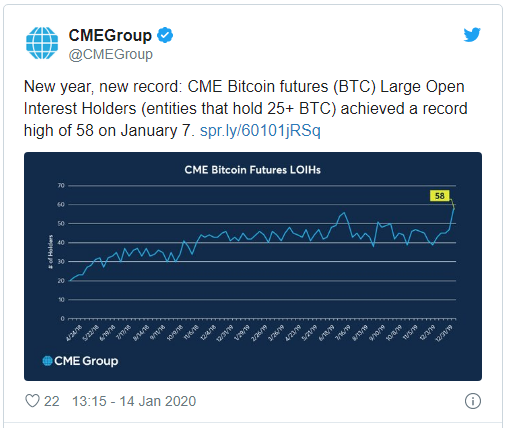 “As each CME Bitcoin Futures contract represents 5 BTC, which at press time are worth $43,900. In total, the 5,328 contracts represent 26,640 bitcoin, worth around $234.2 million. The figure is higher than any other monthly close the CME has reported since its Bitcoin Futures contracts launched in December 2017, with the largest open interest of 2019being seen in July with 5,252 contracts.” CryptoGlobe

Aside from the mass of Twitter-people that we follow, we went to Tom Anderson – an AP of RCM and founder of an interesting Bitcoin lending platform called Drawbridge Lending for some scoop on what this means for the crypto space:

These options could be a game changer for further adoption of digital currency as an asset to be invested in, lent, and traded. The CME / ICE-Bakkt bitcoin options assists market participants by providing a regulated venue that takes away the credit exposure of bilateral marketplaces found in OTC trading, Deribit, Quedex and other venues that do not offer protections afforded by clearing houses.

For our firm, Drawbridge, it allows us to pass through these benefits of cleansed credit to customers looking to gain exposure to bitcoin. In addition, Inherent in regulated exchange products comes the benefits of cost and cash liquidity.  Utilizing CME Group or ICE/Bakkt offers substantially reduced costs vs. custody charges, trade & transaction charges and miscellaneous other costs at non-regulated venues all the while providing for cash liquidity and no later than T+1, while settlement processes on non-regulated venues can sometimes take days, which is not conducive for a positive long-term client experience.

So, there you have it. This hasn’t been a huge volume setter for the CME just yet – but the reaction to the launch of Bitcoin Options is overwhelmingly positive.  And if you’re looking for an on-demand steam of thoughts on CME Bitcoin, we recommend going here first.