If you want to get eyeballs on ESPN or Barstool Sports (which, by the way had a nice segment on Chicago traders recently) – one of the easiest ways to do it is wade into the G.O.A.T debate of who is the best basketball player ever – MJ or the King. Jordan or Lebron. We’re born and raised Chicago here on this blog – so our answer is obviously Jordan (the stats don’t lie: 6-0 in the finals, 6 finals MVPs to LeBron’s 3-for-9 mark winning the title = no contest). But, as much as we believe there’s a factual answer to the G.O.A.T debate – we’ll never know for sure. We can’t point to their head-to-head record, because they never played a game against each other. There weren’t epic Magic/Bird battles amongst Jordan and LeBron, so we’re just left with this theoretical debate on who’s best.

Enter the G.O.A.T’s of the hedge fund world. We’re talking the likes of Renaissance, Bridgewater, Citadel, and DE Shaw – who are all decades old firms and the Michael Jordan’s of making money for investors (and themselves). Here’s the problem for all the young LeBron’s out there looking to maybe one day be considered the G.O.A.T. This isn’t a theoretical debate about two different eras. These guys are still playing the game. And they’re playing it very well! Per the Financial Times:

What did the mere mortals of the hedge fund world do?  They put up a negative 4.07% according to the HFRI index. That outperformed a lot of other asset classes, including stocks, but that’s not the type of performance that garners G.O.A.T talk. To get into that debate in the hedge fund world is infinitely harder than it was for LeBron in the basketball world. Because emerging managers who want to be hedge fund LeBron’s, and get $100 million allocations from sovereign wealth funds don’t just get to lace it up and post numbers in a different era. They have to go up against the likes of Renaissance month in, and month out when performance numbers are posted. Everyone is still playing, the greats and the rookies, in a world where there are no eras.

Jordan doesn’t retire in the hedge fund world. You have to play His Airness Every. Night. And in his prime.

Did we mention he was the NBA Defensive Player of the Year and 9-time All Defensive First Team? 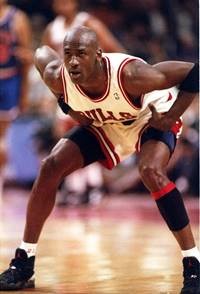