Somebody’s Back to Shorting the VIX

By now, most investors know what the VIX is, but education on how the VIX and other volatility indices work still leaves a bit to be desired. Cboe Director of Education, Russell Rhoads is one of the very few who has written a book about the VIX, but he’ll tell you not to read it because things change so fast – it’s mostly outdated! (which perversely.. made us want to read it).

We hosted an “Investment Seminar on VIX and Volatility” last week at the Cboe (surprisingly, despite VIX being the dominant volatility product,  there are actually 30 (yes 30) Cboe volatility products), with a presentation from Russell about how the market moved and how it has settled in afterward. Here are some of the highlights:

One of the common mistakes some people have about the VIX is how the index differs from VIX Futures. Here’s Russell:

They are very, very different from any other future. The Futures contract diverges from the spot. The Feb future really did track spot VIX for several days. There was only a couple days left of life for the contract. A lot of people that have paid attention to the volatility markets know that when VIX spikes up, it comes back very quickly. It didn’t quite do it the same way. [But] to give you an idea how dramatic of a reversion to the mean [it’s been since then], here is a chart showing the Feb 9th curve compared to the curve we had as of last Friday. 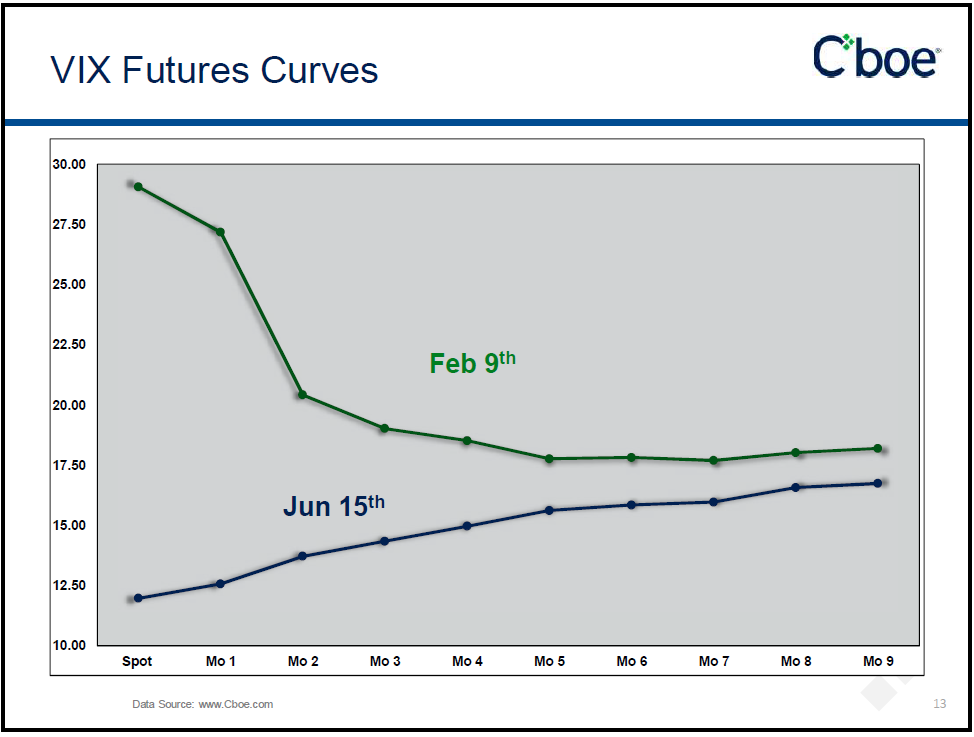 But the question everyone wants answered is why? What did it spike in the way that it did?

One of the reasons VIX Futures went up to much as short covering. You can get lots of data from the CFTC – one is the net long/short positions.

Anyone tell you they were bullish on the equity market going into 2016 is lying to you. Everyone was worried and the VIX reflected that. We went from long to short, very quick into February. Then two months later, the noncommercial entities – are now net short futures. In fact, the net short position is about 53,000 contracts. The week before the February 5th event, the non-commercial were net short 58,000 contracts. 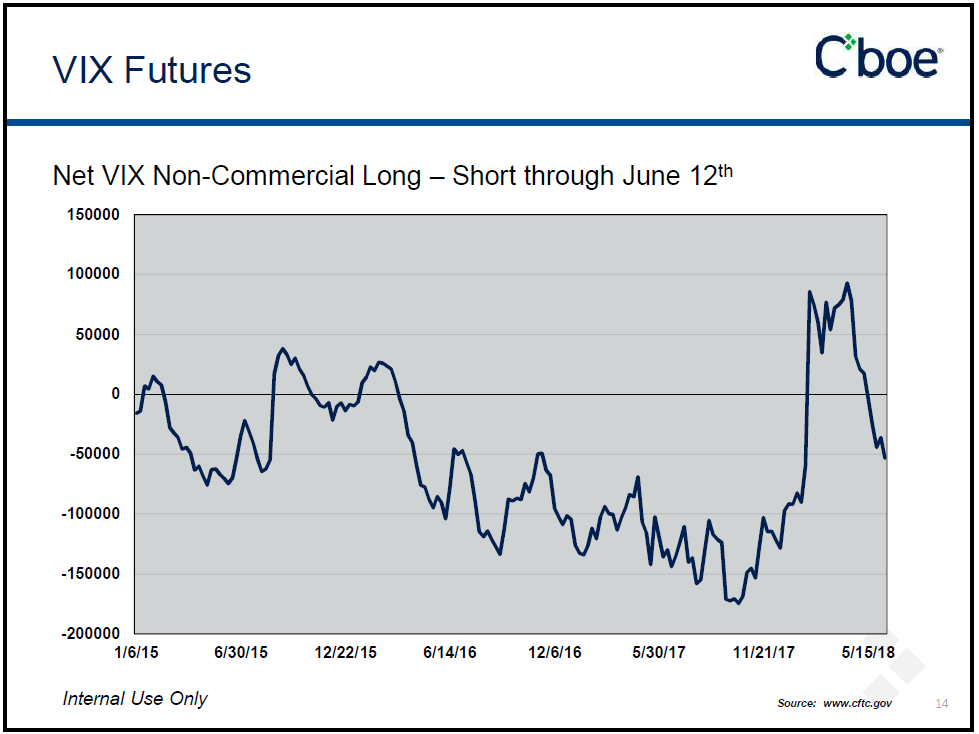 Hundreds of thousands of contracts representing billions in volatility exposure makes one wonder why there is interest in this space beyond just pure speculation. Is there a natural volatility buyer to match up with these volatility sellers?

We’ve got a cboe skew index. We’ve got these stress tests that banks have to do. One of the tests is how are they going to fair with a 10 or 20% drop.  One of the ways you can pass those stress tests buy out of the money S&P put options. What SKEW basically does is measure the expensive of out of the money S&P puts relative to S&P puts that are closer to at the money. The higher those bars are – the higher the skew is – or the more expensive – out of the money puts have been. They have been at there highest levels the past five years. We really do attribute that to the stress test. I want them to go away just to see if the skew comes down, from an academic standpoint. 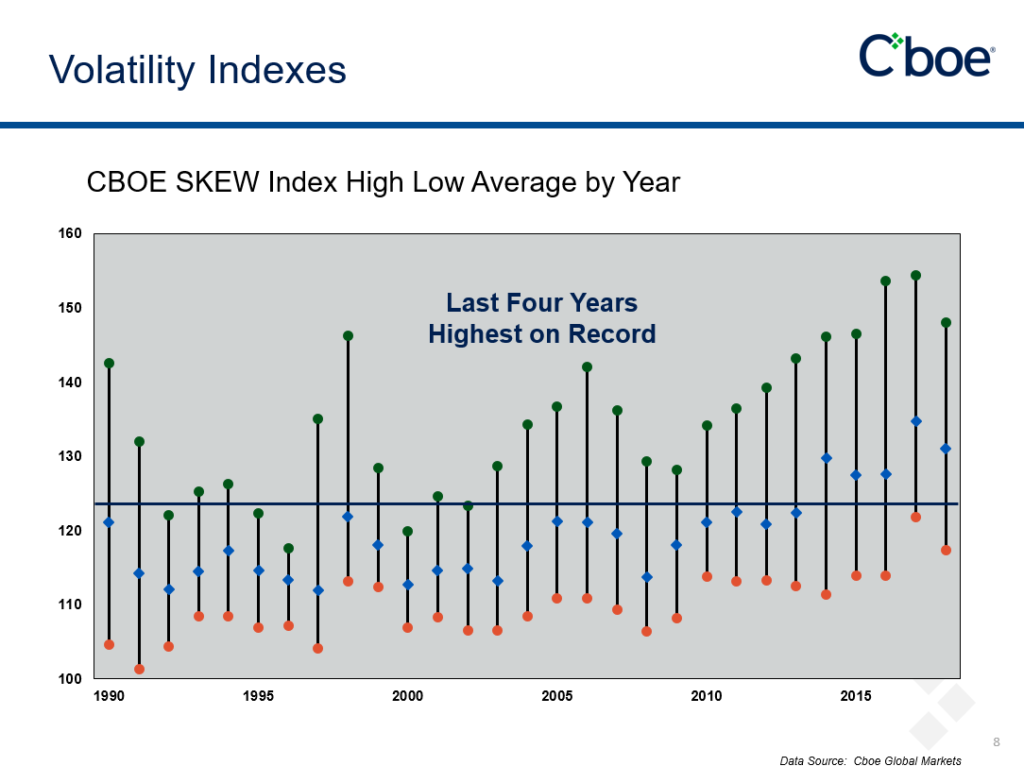 Before this VIX spike, it seemed that the VIX couldn’t get any lower, and in fact, it did. It was consistently below 10 for quite some time. That may seem abnormal but you mentioned it might surprise people to know the average VIX price is quite low, to begin with?

One of the other criticisms we get with the VIX is that it’s too low all the time. Do keep in mind that the long term average of the VIX is around 19 going back to 1990, the most common closing price for the VIX starts with 13. Over half of the closes have been below 14.50. When you see VIX at really low levels, it’s more normal than you think.

Notice the beginning in November moving into the new year, the non commercial was getting less and less short.

We got four calls from reporters over the course of January. “VIX is moving in the same way as the S&P 500. What does the mean? Does that mean the VIX doesn’t tell us anything anymore? Low and behold, it looks like people were concerned even with the S&P 500 moving higher.

When VIX and S&P 500 don’t diverge like they normally do, it’s telling us something. 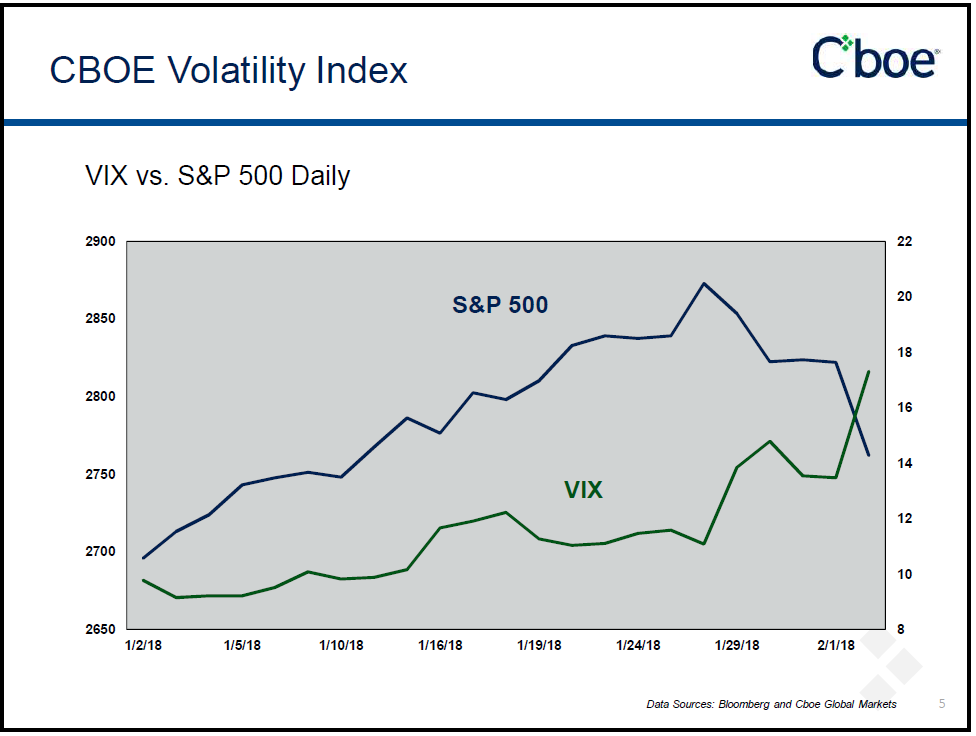 The big losers on this spike weren’t just the 10% drop in equity markets, it was mutual funds shutting down and billions being lost in the VIX products. Can you talk a little about that?

Here are the change in assets in how much money was in them at their peak, and how much money are in them are the end of the quarter. Even the ones that did well. VXX was had 60% in the first quarter, but 900 Million came out of that. I think a lot of people owned that for a long time. Finally made some money. They finally were able to walk away. 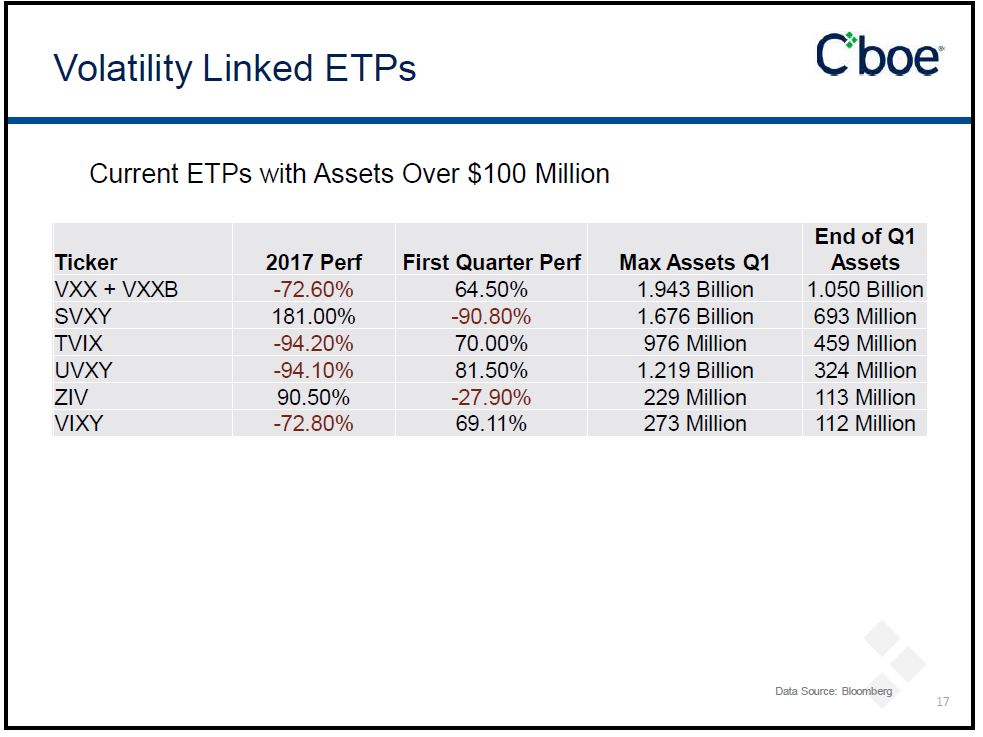 We continue to see a withdraw of money from these funds, but we are actually starting to see more money in the VIX futures markets. The open interest was about 375,000 in the first quarter – it’s now at 456,000.

That’s good news for volatility managers like the panels we had such as Pearl Capital Advisors, Resolve Asset Management, and Certeza Asset Management. We’ll share more on them in an upcoming post.