Much has been made about the artificially low-interest rate environment formed by central banks and their quantitative easing punishing savers – with one effect being investors moving into riskier assets in a reach for yield. But with the US 10 Yr Note going over 3% for the first time since 2014, the conversation is starting to turn from how low rates were bad, to how high rates are bad. The arguments surround the usual topics, such as the Fed won’t be able to catch up with inflation, longer duration bond investors will see marked to market losses (as rates rise, prices fall), and the credit markets may tighten up.  But surely if low rates were bad for groups such as savers… then higher rates must be good for some groups…. No?

Enter Ben Carlson of the Wealth of Common Sense blog with his latest post “Who Benefits from Rising Interest Rates, ” in which he nails one particular nail on the head we happen to know a thing or two about.

CTAs who invest using a trend-following approach could also benefit from higher short-term interest rates. These funds trade mostly futures and hold 80 percent to 90 percent of their assets in cash as collateral for those futures contracts.

These funds were helped by high interest rates in the 1980s and 1990s but have been penalized by lower rates in recent years….But higher interest rates could provide a tailwind for this [space].

What’s all that mean – CTAs, cash as collateral, and so forth? Well, CTAs are a professional investment manager category where asset managers are registered as Commodity Trading Advisors. These advisors are generally lumped together under the moniker managed futures, and specialize in trading exchange-traded futures contracts both long and short in markets across the world. Futures contracts, as you may or may not know, have naturally built-in leverage – where you only have to put up $750 in an account, for example, to control $20,000 worth of Corn. What this means at the professional level of managing money using futures contracts, is that you can get, say, $750 million worth of managed futures exposure, by putting up just $250,000 of cash into the trading account.

What to do with that extra $500 million? Well, you can leave it on deposit with the clearing firm and purchase some T-Bills to earn interest, or you can hold it back in your main accounts and buy bonds with it! Now, you probably don’t want to get too carried away buying the bonds and turn the managed futures product into more of a bond product. But why not earn as much interest as you can on short-dated maturities which aren’t likely to skew the portfolio towards a bond profile. That has typically been accomplished with short-dated treasuries, but managed futures funds (especially in the mutual fund wrapper) have been going further afield into corporates and floating rate notes and the like. Just take a look at what we found under the hood for one of the larger managed futures mutual funds (those aren’t your father’s T-Bills): 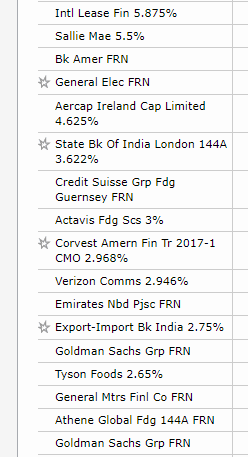 Problem is – there hasn’t been much money to be made on the extra money for much of the past 10 years, with 1-year yields on Treasuries below 1% until earlier last year (and below 0.50% for a big portion of that). But change is afoot,  with 1-year T-Bill constant maturity rates now up at 2.2% and other interest rate products are following suit in a big flattening of the yield curve (short term rates rising faster than long term rates). So, while a classic trend follower may look at the chart below and see a good trade, sophisticated investors understand that there are actually TWO trades going on for managed futures in a rising interest rate environment. One, the ability to go short bond prices (rates up) to capture profits from any extended trend in that direction. And two, the ability to earn a higher interest rate “on the side,” so to speak, via investments in T-Bills, bonds, and other notes with their excess cash.