Launching a Futures Contract is Hard

While just about everyone was paying attention to wild up and downs of the market last week, those in the commodity world were taking note of China launching a crude oil futures contract. The contract, based in the Yuan, has the potential to shift where and when crude oil hedges and speculation are traded around the world, as well as shift the need for US dollar reserves to enter into such trades. Japan and Singapore have attempted their own crude contracts in the past with little to no success, but this feels like it may be different for China?

So just how hard is it for a new contract to succeed? Well, we can look to recent history as a guide, with a sort of arms race in the now for-profit futures exchange space seeing the launch of new Bitcoin Futures contracts on the CME and Cboe. While over at ICE, FANG+ Future launched to capture the volatility playing out in the tech markets. How are all these newcomers to the futures markets faring?

Coming into 2018, people saw Bitcoin going to 50,000 or even 100k. That could still happen, but as of now, it’s hovering around 7k, declining half of its value in just three months. Many heralded the futures contract as a way to hedge and protect against just sort of fall, so it’s not surprising to us that Bitcoin futures have been seeing steadily increasing volume. Here are some quick stats about the Bitcoin Futures contract as of March 13th via the CME: 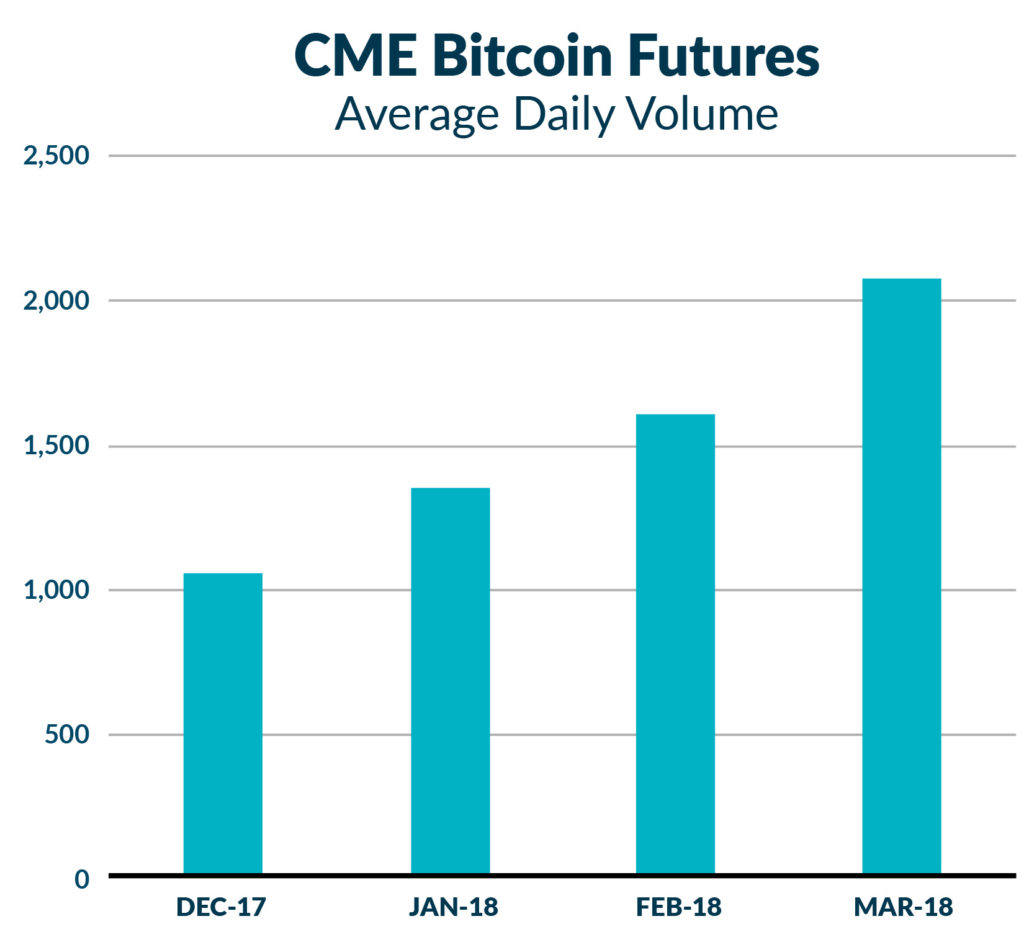 Meanwhile, the Cboe Futures contract reached even higher volume, hitting 14,139 contacts on March 15th. Of course, with the key difference between the CME and CBOE products being the CME’s contract size at 5 bitcoin while the Cboe’s is 1 Bitcoin, the CBOE’s volume should be 5x the CMEs for the same notional trading levels. Whether both exchanges can grow this space simultaneously remains to be seen, but the history of competing for futures contracts doesn’t bode well for that scenario. It’s typically a winner take all scenario, with more volume leading to better liquidity leading to more volume, as everyone wants to be trading where everyone else is trading. There’s also the little problem of the major sell-off in Bitcoin, and whether that will dampen the need and popularity of these products. One study showed Bitcoin internet searches have fallen 80%, and that, more than anything, may determine whether volume on the futures contract is just starting to ramp up or if volume will follow Bitcoin interest lower.

What we’re seeing down on the front lines dealing with new funds launching products which desire to trade these future markets, is that the exchanges main problem is in the brokers enabling client access to the markets. It’s not uncommon to see FCMs requiring 2x or 3x margin, limiting the number of positions, and requiring millions of dollars to be able to trade the product. Contrast that with brokers outright advertising 0.5x day trading margins and the like to build interest in the emini S&P and you can see the difference in scalability here.

Success: To Be Determined

The ICE was out with a new product before the Bitcoin craze, looking at a more mainstream “market” known for its volatile moves, FANG stocks. But they didn’t just build a futures contract around Facebook, Amazon, Apple, Netflix, and Google, they added Tesla, Alibabba, and more to create a global grouping of 10 high flying tech stocks. This contract was created in an environment when people were wondering when volatility would make a comeback. At the time, it seemed like it could be years, not months, and we saw the FANG+ Futures as an opportunity for those looking for a little more market movement. With FANG+ having a larger Average Dollar Value and Annualized volatility than the NASDAQ and S&P 500 (see here), these futures sure are supercharged, with the June contract dropping 400 points in the last three weeks. 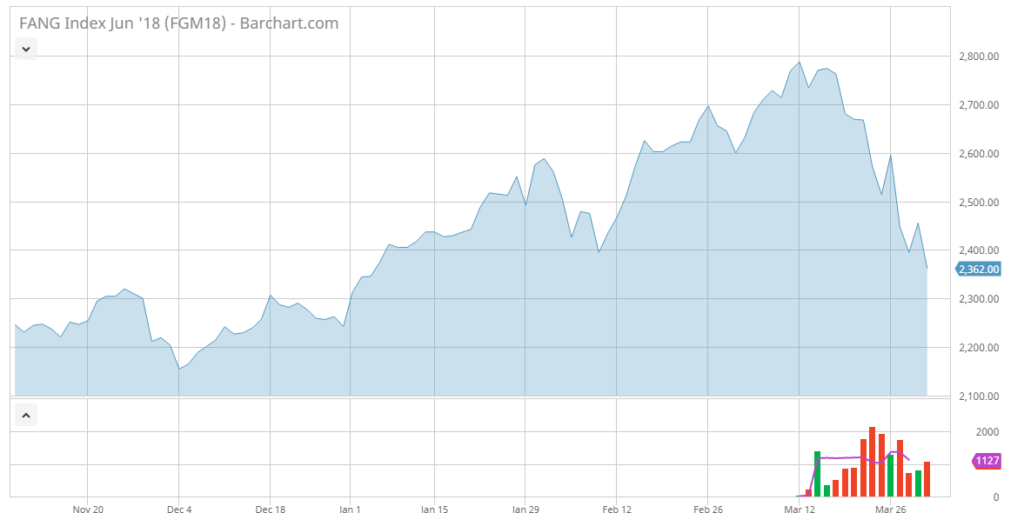 (Disclaimer: Past performance is not necessarily indicative of future results)
Chart courtesy: Barchart

That comes out to roughly $20,000 per contract (compared to the eMini’s $11,150 per contract over the same time span). Meanwhile, June’s Futures contract highest volume in March, with 2,139 contacts – keeping it squarely in the startup phase for now.

Success: To be Determined

Across the Pacific, the Shanghai International Exchange has launched its own Crude Oil contract, traded in Yuan, making it China’s second attempt at a futures contract (the first one launched in 1993 failed because of volatility). Here’s Bloomberg on the basics:

Here’s how it did on its first day:

After an initial surge in volume that outpaced overnight transactions in global benchmark Brent crude in London, trading tapered off toward the end of the session and the contract closed at 429.9 yuan a barrel ($68.22). 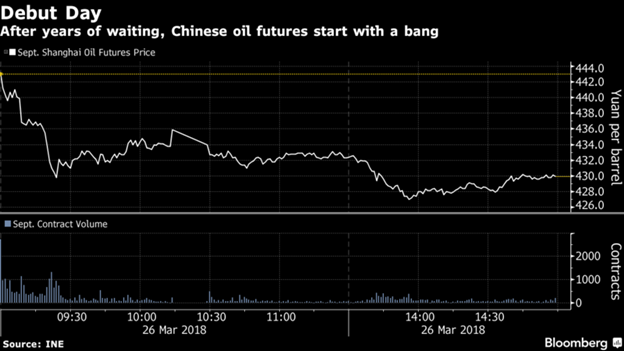 That’s a pretty good start! But why is a new crude oil contract important? It all comes back to China’s looking to have their currency have a higher profile on the international stage. For all the oil refineries that are in and around Asia, it would make sense for them to no longer trade their derivatives on the CME or ICE and start trading on the INE. But this isn’t China’s first play to make sure more oil is traded in the Yuan and not the U.S Dollar. As we’ve talked about late last year, China is working with Russia to have all Russian purchases to be in the Yuan as well:

Any country will now be able to trade and hedge oil, circumventing U.S. dollar transactions, with the flexibility to take payment in yuan or gold, or exchange gold into any global currency.

As China further forges relationships through its One Belt, One Road initiative, it will surely pull other exporters into its orbit to secure a reliable flow of supplies from multiple sources, while pressuring the terms of the trade to exclude the U.S. dollar.

The world’s second-largest oil exporter, Russia, is currently under sanctions imposed by the U.S. and European Union, and has made clear moves toward circumventing the dollar in oil and international trade. In addition to agreeing to sell oil and natural gas to China in exchange for yuan, Russia recently announced that all financial transactions conducted in Russian seaports will now be made in rubles, replacing dollars, according to Russian state news outlet RT. Clearly, there is a concerted effort from the East to reset the economic world order.

If everything goes China’s way, we could be seeing the Shanghai contract become a new benchmark for the international crude oil contract. China is even waving taxes to attract interest abroad. But before we get away from ourselves, there’s still concern from many about investing in a market completely state-controlled, via Bloomberg:

A state-led market is one of the main barriers to success for the INE contract, according to Fitch Group’s BMI Research. With government policy and regulation playing a large hand in dictating consumption, production and trade, and national oil companies dominating all parts of value chain, potential participants will be wary.”

That’s not to mention the possibilities of bans on short trades as we’ve seen in Chinese equity markets. Although maybe the reverse would be the threat there, banning more longs if prices get to high and influence Chinese consumers and inflationary pressures.

The interesting part here is that this emergence of more localized derivatives on Oil products (see Brent Oil Futures, WTI futures, Dubai futures, and now Shanghai Oil futures), may shift the dynamic away from the winner take all dynamic mentioned above for competing futures products. While the contracts are highly similar, and a consumer would be just as happy with a barrel of WTI as Shanghai Oil – the details of deliveries and localized supply and transportation logistics (remember the Cushing problems) matter enough to some traders for there to be value in hedging/speculating directly in that region versus using an imperfect proxy like WTI Crude, which is deliverable thousands of miles away.

All this is to say – it’s hard for a new futures contract to become highly traded. Like innovation, many ideas and new products have come before and failed whether it be because of waning demand or increased competition. Will FANG+ become the new Emini? Will Bitcoin survive the post mania burnout? Can China show their might on a global stage through a crude oil futures contract? Will we see a cannabis market as the next product as more and more states legalize it? All of this is still too early to know. Stay Tuned.