Why did XIV Implode?

While Credit Suisse is getting raked over the coals for its short Volatility product $XIV dropping $131 in 24 hours, many are left puzzled as to how it all came to be. 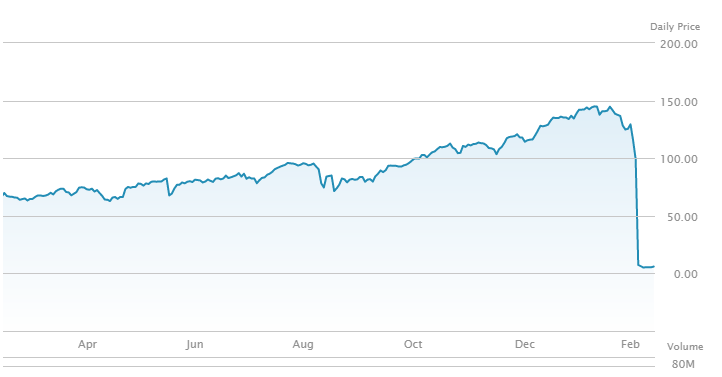 (Disclaimer: past performance is not necessarily indicative of future results)

Here is what Credit Suisse’s CEO, Tidjane Thiam, had this to say about the -95% drop:

‘It worked well for a long time until it didn’t’

“It’s not a proper investment vehicle,” Thiam said. “So we also said because of that, because the price can vary so brutally, the prospectus says that if the price goes down 80 percent, we can close it.”

And once you’re at 5, given the structure of the note, there is no prospect of recovery … The product was basically not usable anymore,” he added.

Is honestly still honestly after XIV imploded? Nevertheless, people trading their entire retirement on this product are wondering just what happened. For starters, let’s understand what exactly XIV does via ETF.com:

There were a couple interesting and unexpected occurrences throughout the most recent three days of trading. However, there were two things that were not unexpected at all. First, the magnitude and velocity of the equity selling was not unexpected. Precise timing of such moves is a difficult and often fruitless endeavor, but the existence and frequency is widely acknowledged. Indeed, there is a reasonable probability that the stage has just been set for the main event to come. But rather than theorize about a possible 35% market correction, I would like to take a few moments to comment on the second occurrence that was not unexpected; the collapse and liquidation of inverse VIX exchange traded products (e.g. XIV and SVXY).

I find it interesting that I’m seeing the blowup event for these products being classified as a black swan. Perhaps we’ve forgotten that a black swan is something so rare as to be purely theoretical from a statistical viewpoint. It is random and unpredictable because there is no historic basis for such an occurrence. This was certainly not the case for the XIV liquidation. The timing of such an event was random, but it was not purely theoretical or unpredictable. Myself and many others specializing in volatility derivatives considered this to be so likely that we spoke about it casually as an eventual certainty. Those suggesting that it was an extreme outlier were simply misinterpreting historical data. In short, they were too focused on relative values instead of absolute values, in addition to over-weighting the historic settlement prices at the expense of intraday extremes. Roughly 50% of the time, a spike in VIX above 50 results in the front month VIX future exceeding 30. A quick reference back to prices in August 2015 illustrates the point. Knowing that VIX spikes above 50 are highly probable, only a few conditions are needed to set the stage for an XIV liquidation. First, a low volatility market regime. Second, suppressed VIX futures prices. Third, the equity market selloff would need to continue into the close of trading.

Ironically, the popularity of these products significantly increased the probability of their own demise. These products, and others like them, provided a simple vehicle for betting against volatility. Throughout the extended low volatility market regime, excessive selling pressure enabled by these products continually pushed the VIX futures prices below what would historically be considered fair value. Consequently, the environment for an XIV blowup was enabled by its own popularity. All that was needed was a sharp single day equity selloff that continued through the closing bell. The feedback loop previously suppressing prices would reverse as the creators of these products were forced to push large buy orders through an illiquid market to meet the mandate of the product. This would ultimately have the effect of pushing the VX1 settlement price approximately $6 above where it might’ve settled without the extra buying pressure. Stated simply, the popularity of these products caused the pertinent contracts to settle the previous Friday about $1.50 too low followed by a Monday settle at a price about $6.00 too high. Had that not been the case, a liquidation event would’ve likely remained theoretical.

The only real unexpected result of Monday’s market panic was an extreme widening of the VIX bid/ask spreads at the close of trading. I feel for those who might’ve been a bit over-extended in some VIX positions and were negatively affected by what we believe were errant quotes purely resulting  from forced re-balancing and liquidation in the VIX ETPs and not representative of fair contract values seen moments before and after the close.  Albeit, it was a nice demonstration of what the blowup of an influential fund can do to an otherwise orderly quoting process. This firmly reinforced our stance that any short VIX exposure should be quite modest and allow the manager to calmly wait for narrow spreads to return. Our expectation going forward is that this will serve as a bit of a reset for the VIX term structure back to its normal character. Once VIX returns to low levels, we expect to see a much steeper slope to the volatility curve than what has persisted during the previous 18 months. Hopefully market participants will no longer be so eager to suppress prices to unreasonably low levels and any short volatility positions will carry adequate compensation for the significant amount of risk, which has not been true of that trade for quite some time. In the meantime, edge in trading the VIX term structure has increased to levels not seen since 2011. It would be nice if high volatility would stay around for a bit.

To hear more about Brett and his strategies, you can download our investing in VIX and volatility whitepaper or listen to him speak about trading the VIX in our webinar recording.