Stranger Things – The Upside Down of Netflix

Maybe it’s the 80’s nostalgia, maybe it’s dungeons and dragons, or the themed pop up bar in Chicago, but the thought a season two premiere of Stranger Things has us thinking of Demogorgons and Thessalhydra this Halloween season.

The return to the Upside Down is downright scary. Is Will trapped between this world and the Upside Down forever? Where did Eleven go? While we wait with anticipation, we can’t help but notice the Upside Down thinking of investing in tech stocks these days. Specifically, the company creator of Stranger Things: Netflix.

In the past 5 years, Netflix (NFLX) is up 1,851%, despite emerging competition from HBO, Amazon Prime, Hulu, and soon to be Disney. 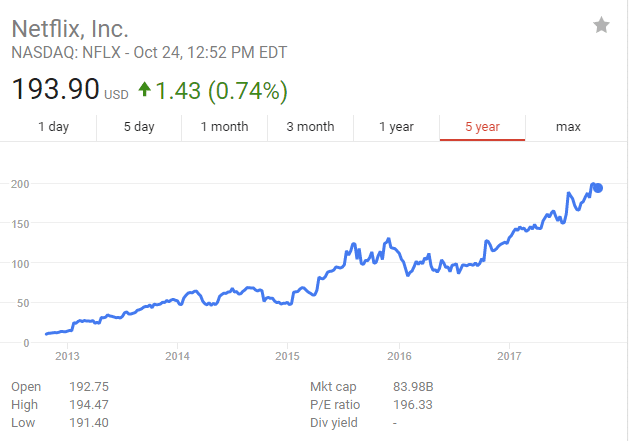 Netflix has doubled their content budget over the last two years, with the plan to spend $ 8 Billion on programming next year. Here’s the cash spending of Netflix since 2014 via Bloomberg: 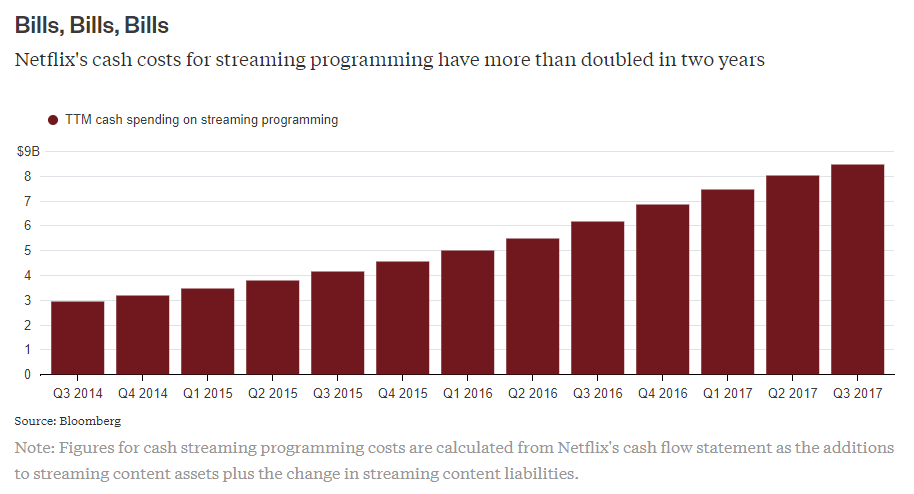 But it isn’t all roses. Netflix has committed to original programming – but that has come at a cost: debt. Despite the popular shows, doubling down on popular content, and raising the price of service, the scary thing is Netflix has a negative cash flow.

It had negative free cash flow of $2.1 billion in the 12 months ended June 30 and is on the hook to pay more than $13 billion in the next three years for its entertainment programming.

The Upside Down of it all is the company plans on having negative cash flow “for many years.” To make up for it, Netflix plans on selling $1.6 Billion more in debt and they are selling it with a lower yield than other companies.

There’s something a little bit spooky about one of the most profitable tech stocks in the (FANG) group that doesn’t make money. Google makes money off ads. Apple makes money off phones. Facebook makes money off ads. Netflix makes money off subscriptions (but it’s not enough). Which leads us to the scariest part of it all. Do you have to make a profit for a company to be successful? Is it Upside Down thinking to accept that companies only need to provide a good service in order for the stock to continue to rise? Billionaire Hedge Fund Manager Daivd Einhorn suggests we might be experiencing  a paradigm shift:

Finally, there is Netflix (NFLX), where the quarterly results beat expectations and the shares advanced 21%. Competition is heating up and media companies such as Disney will be removing their content from NFLX to compete directly (bulls used to believe that Disney would pull a Time Warner/AOL and pay-up for the highly promoted but profitless business). NFLX continues to accelerate its cash burn as it desperately tries to compensate for its inability to rely longer-term on licensed content. On the second quarter conference call, the CEO stated, “In some senses the negative free cash flow will be an indicator of enormous success.” To us, all it indicates is that NFLX is capable of dramatically changing the economics of stand-up comedy in favor of the comedians. Perhaps, there really is a new paradigm for valuing equities and the joke is on us. Time will tell.

What’s even more fearful is what might happen to that debt. Demogorgons are scary, but being on the wrong side of the trade if Netflix can’t keep up their programming with increased competition can be just as scary. Here’s Bloomberg:

It’s important to realize that this company’s entire business model relies on a very compliant debt market. Understandably, stock investors like the Netflix strategy because the more the company borrows, the more upside they have. But bond investors are taking on more and more risk without that same upside.

Investors will inevitably snap up Netflix’s latest bond sale and the others likely to follow with gusto. But they should pause to consider whether the company’s reliance on a hit-factory business model merits such enthusiasm.

Netflix’s stock price seems to be fueled by the enthusiasm behind the programming and the originators of changing the way people consume media. That’s exciting and it’s disrupted the media business forever. But will it last? If Netflix programming has a bad year, what happens to those bond investors and NFLX investors then? We aren’t in the business of analyzing stocks but this sort of stock run-up fueled by social trends feels eerily similar to the way investors are shorting the VIX. They’re shorting the VIX because there’s market sentiment that it isn’t going to go up anytime soon. This Halloween season, the spooky is the unknown of when and if the tide will turn. Will Netflix never make money but see their price soar? Will short VIX investors continue to make money until it explodes the other way? Will humans invest in robots, profit from the robot apocalypse? Are we in the Upside Down or is our investing world and the Upside Down merging? That’s a frightening thought.