Russell 2000 Futures Back at CME

While it seems the CME is the dominant player in futures in the US, ICE has been coming along as a competitor in the quest for global dominance as the top futures exchange. Most people immediately jump to a look at volumes in  WTI Crude Oil (CME Product) and Brent (ICE product) as a proxy for how each exchange is doing in markets they compete in.

But the other competition between the two exchanges is who has the rights to the family of Russell Indices. It first started with the CME. Then in 2007, it went to ICE. Now, the CME won the licensing back with new contracts launched in April. That meant the CME and the ICE had competing contracts until the rest of the ICE contracts expired. For the first time in 2017, there were more Russell 2000 Futures contracts traded and held on the CME than on the ICE.  Futures are an all or nothing product, meaning traders want to be where all the other traders are – and you can see the large jumps in CME volumes as we approached the switchover point: 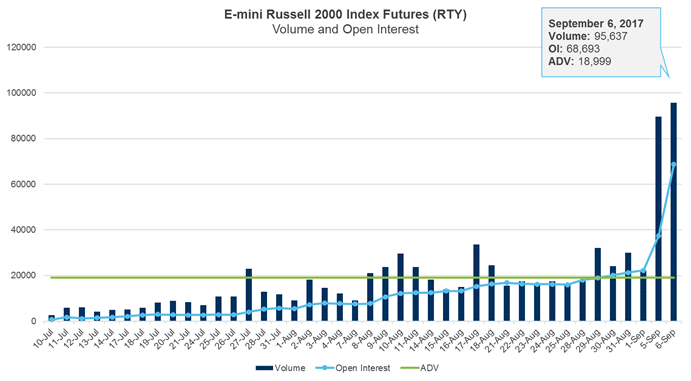 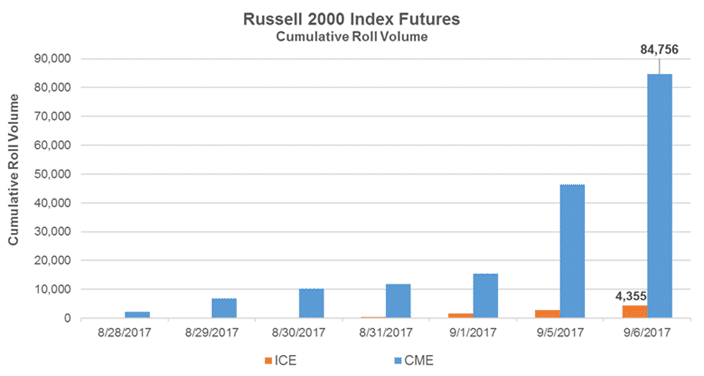 Here’s a little bit of history around the licensing switches via Futures magazine:

Back around 2002, the Russell family of indexes launched an innovative project where they would license its indexes on a non-exclusive basis to any exchange willing to pay a fee. Several exchanges jumped at the chance. One of the issues for Russell, at the time, was that although the CME had made a huge success of the Russell 2000, its broad market benchmark Russell 1000 was not doing much volume there. This despite that the fact that more financial entities actually used the Russell 1000 as a benchmark for broad market performance than the S&P 500. The two indexes were highly correlated, approximately 99%, so it didn’t make much sense for a trader — even one who used the 1000 as a benchmark — to utilize the futures product to hedge when the S&P 500 was so liquid.

While several exchanges jumped at the opportunity to list futures on its products, the liquidity remained with the CME. But in 2007, when the CME was doing battle with ICE with competing bids for the Chicago Board of Trade, Russell saw an opportunity. It still felt that the Russell 1000 futures was a viable product and needed to be promoted by an exchange not conflicted, so when the most recent license ran out, ICE and Russell entered into an exclusive arrangement for ICE to list the 2000. This was a huge boost to ICE, which up to that point was not considered a serious threat to CME’s bid, but this move would leave a mark.

For professional retail traders, alike, this move is potentially a cost saver.

When the Russell returns to Globex, traders will enjoy a 70% margin offset against the S&P 500 and a 65% margin offset against the Dow and Nasdaq 100 contracts, according to McCourt, who adds, “We are very excited to bring this contract back within the liquidity pool at CME to trade alongside other major U.S. equity index benchmarks. It will put those indices on a common 24-hour platform and also introduce capital efficiencies.”

Professional trader Morad Askar of FuturesTrader71.com is happy to see the move. “I didn’t like it when it went to ICE in 2007,” Askar says. “As a CME member I was trading at membership rates and it [offered margin offsets] with other index products. When it went to ICE it became a lot more expensive.”

While member rates and margin offsets are a big draw, Askar says that the data fees are also less expensive for retail traders — many of the customers of his educational services — on CME than ICE.  “For someone who is a non-professional it is $5 a month; it is not $110, which is what ICE is charging for real-time data. For the average prop guy it doesn’t matter, just a couple of points on the E-mini S&P 500, but for people who want to come into the industry, it adds up.”

For traders that haven’t already made the switch, or those interested in the Russell 2000 family contracts. You can find more information on the contract switches from the CME here. 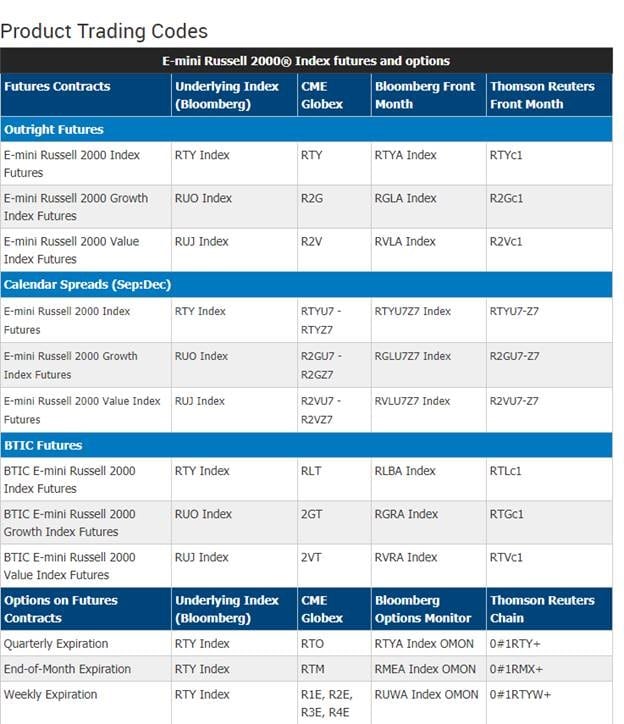