It’s easy to see why most of the finance world love visualizations. As they say, a picture’s worth a thousand words.  But it seems to be even more the case when talking stats, numbers, and facts to visualize. We tend to have our fun turning data about interest rates, crisis periods,  Star Wars, and futures markets into infographics.

Which is why we were drawn to FIA’s somewhat new “FCM Tracker”, an interactive data visualization tool with a collection of charts, tables, and all the stats on trends in the FCM space. Are these acronyms getting confusing? No idea what FIA or what an FCM is? Let’s dive in.

Who/What is the FIA?

FIA – or the Futures Industry Association was created in 1955 as a space for people in the futures industry to network and work together. Here’s FIA’s definition:

It was originally established to provide a forum to discuss issues, work with exchanges, represent the public customer, study ways to reduce costs, eliminate the abuse of credit, cooperate on education efforts and protect firms from fraudulent warehouse receipts.

In the 1970’s, it rebranded itself as FIA, included Chicago FCMs, and moved to Washington D.C. Essentially, FIA has since evolved into representing the futures business in Washington and speaking for the business on their behalf. It’s our lobbying group, essentially – although we don’t think of it with the same negative connotation always associated with that moniker (but maybe because it’s our industry?). Their goals include supporting open, competitive, and transparent markets, all while making their best efforts to play a critical role in the reduction of systemic risk in global financial markets.

What is a FCM?

Futures Commission Merchants, or FCMs,  are the entities that sit between end clients (investors, farmers, hedge funds, airlines, insurance companies, grain elevators, etc) and the futures exchanges (CME, Eurex, ICE, etc.).  You have to have an exchange membership in order to trade on a futures exchange, but they are expensive – so the industry figured out long ago that it was more efficient to have a few big exchange members (the FCMs) who in turn would “clear” the trades. We call them “clearing firms” in the business, and their job is to hold client money, create daily statements, post margin for customer positions to the exchange, and generally speaking guarantee their clients profits and losses to the exchange, so the exchange can in turn guarantee such to the other end of the trade.

There are big bank affiliated FCMs like Goldman, Morgan Stanley, and Wells Fargo that don’t take “two legged clients”, dealing mostly with big hedge funds and institutional investor accounts – and independent non-bank FCMs like RJO, FC Stone, RCG and so forth. Different FCM’s have different service specialties, and one of RCM’s services is to identify capacity, market coverage, credit ratings, and more for its clients.

Following the industry black eyes of MF Global and PFG (both FCMs), there was a call across end clients,  regulators, and the industry as a whole for greater transparency into FCM numbers. The FIAs FCM Tracker is a direct result of that effort, and the numbers are all there for market participants to see and use as they see fit. One particularly interesting view of the numbers is the assets within FCMs overlaid with the number of FCMs. Here’s FIA’s FCM Customer Funds data showing an uptick in customer funds despite a severe downtick in the number of FCMs. We’ll leave the over-regulation arguments for another time, but you can see it clearly has had an impact on the number of firms – but with the winners retaining the spoils, instead of customer assets leaving the space along with the closing FCMs. 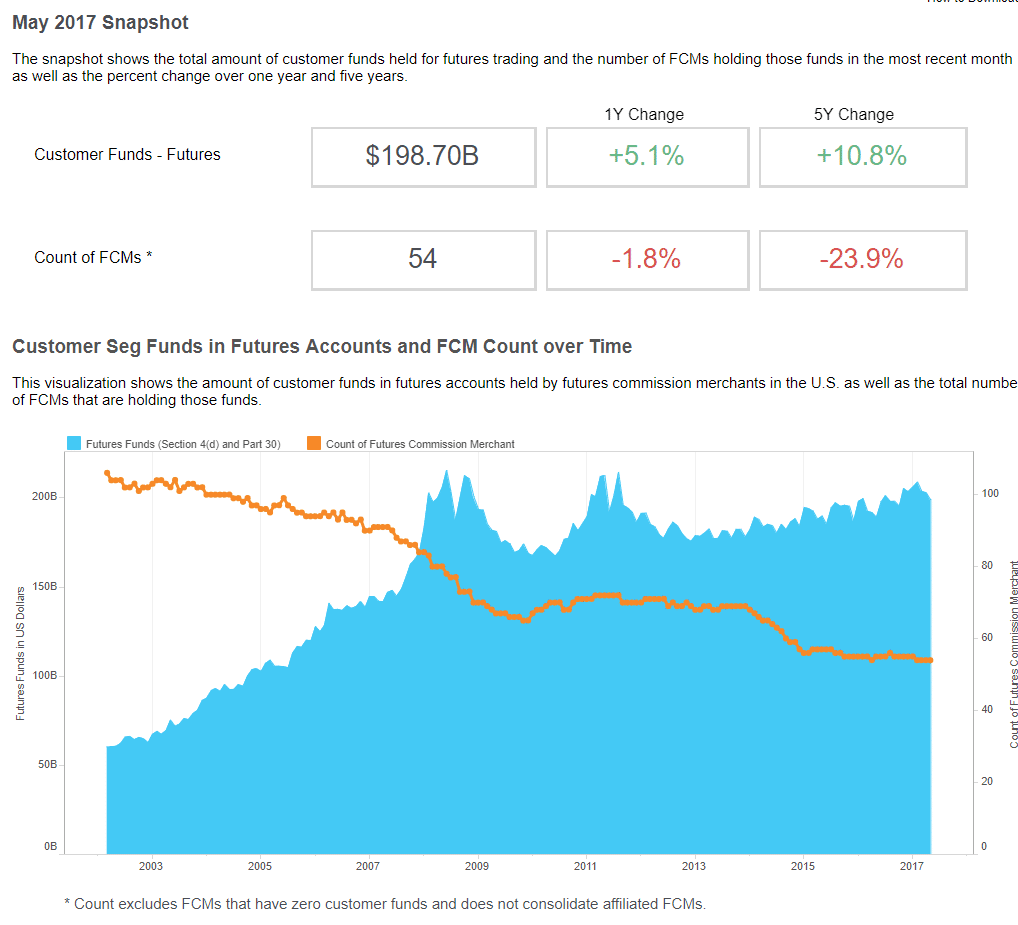 According to the FIAs data, there’s roughly $200 Billion currently held at 54 FCMs for access to futures markets. If divided evenly, that’s 3.7 Billion per FCM, but like anything else – there are a handful of big players that hold most of that money. The top 10 in seg funds are all large banks holding $116 Billion of the total 200 Billion. But Seg funds are one of four types of customer balances FCMs hold. Here are the definitions via the CFTC.

Customer funds are held in four types of accounts:

If you combine seg funds, with swaps, and the rest, FIA provides a further breakdown of the FCM customer fund numbers totaling roughly 270-280 Billion:

56% of funds are in seg funds, 28% in swaps, followed by 15% in Part 30 accounts. Since January 2014, Swap accounts have seen the largest growth, from $24 Billion to $80 Billion in May 2017. It’s not just that swaps have grown, it’s that swaps are outpacing the other types of accounts. Swaps now represent 29% of customer funds, compared to only 14% just three years ago!

A couple years ago, compiling this data would have been quite the task. Now, FIA can pile together the data to give us futures folk a good overview as well as breakdowns of FCMs and every stat anyone would want to know.

If there’s something you’re curious about in the FCM and futures space, head on over to the FIA FCM Tracker and download, review, and analyze anything you want in the space. It’s there for the taking.