The Fed’s No Volatility Mandate

We can’t help but wonder aloud if there’s a hidden mandate at the Fed to suppress volatility whenever/however they can. History has shown that lower volatility in the stock market has been the effect of QEs, but there still used to be some uncertainty about when and where and how much those volatility draining tools would be implemented. These days, the pizzazz of waiting to hear if the Fed raises interest rates seems to be on permanent life support. It all seems “built-in” to the markets weeks if not months in advance. For example, we’re two days away from the June meeting and according to the CME’s Fed Watchtool, there’s a 95.8% probability it will be raised from the 0.75%-1.00% range to the 1.00%-1.25% range. 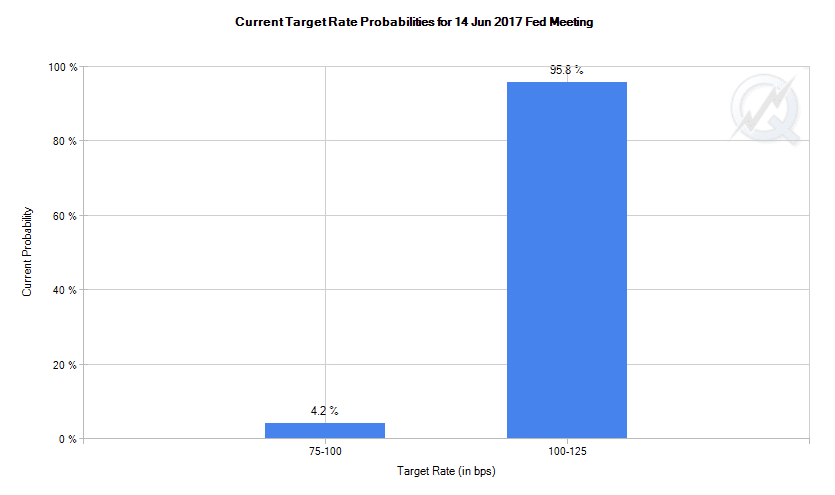 Our question – is the CME’s FedWatch Tool in the Fed’s quiver of data and analysis used to decide the direction of rates? The official answer is no, but it’s not too hard to imagine a non-recorded conversation taking place where they all agree that they can’t do anything too different than what market participants are expecting, or else there would be a huge spike in volatility and mini panic.

We’ve talked at length how the futures markets view these rate hikes and what the CME’s fed futures actually represent:

This is more complicated than it looks – as it is really just taking the difference in the expected fed funds rate between the start and end of the month and dividing it by the assumed hike amount (25bps). For example, if the inferred rate from them fed funds futures was 1% at the start of the month and 1.25% at the end of, the difference would be 25bps (0.25%). Divide that’s by 25bps and you get 1 (25/25) or 100% chance of a 25bps rate hike.

Now, this is the inferred probability of a rate hike as expected by traders of the Fed Funds futures, but that’s a mouthful for reporters, who usually just throws out the percentage probability without providing context.

We’ve also have done our best to visualize how rate hikes could affect your portfolio in a neat infographic: 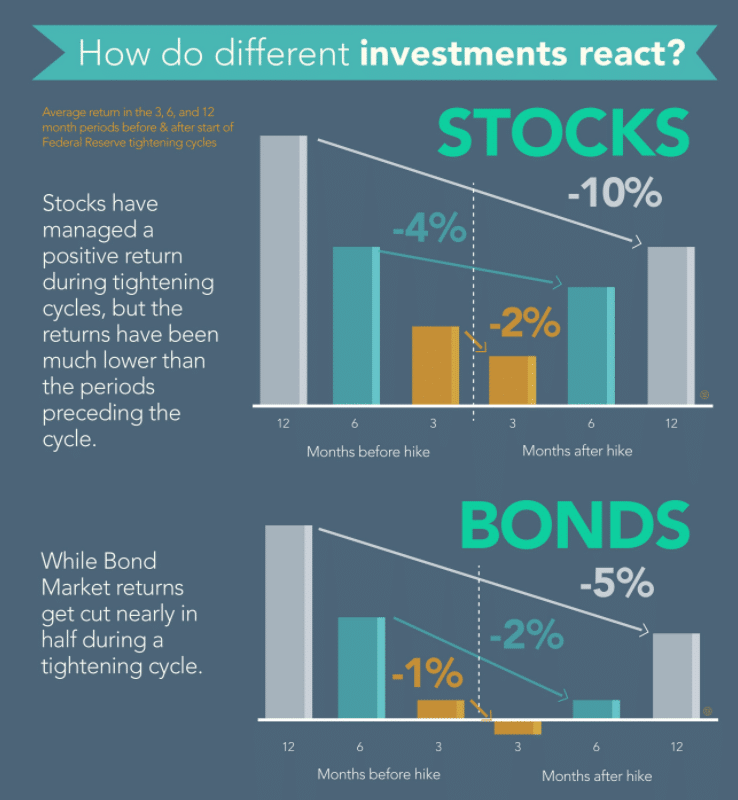 But what is piquing our interest is the continued “interest” in the 30 day fed fund futures contracts. Open Interest has nearly doubled since this boring rate cycle began at the end of 2015/beginning of 2016. In Jan 2016, Open Interest was around 200,000, whereas, now the July 2017 contract stands at around 428,000. This suggests that traders are using the Fed Fund Futures more and more to speculate and hedge against possible surprises in the Fed’s decisions – which is confusing when held up against the fact that the Fed seems more transparent than ever before in exactly what will transpire at the next meeting.

And this isn’t the only contract people are paying more and more attention to.

Rising interest rates has also been the catalyst to the rise in EuroDollar Futures trading, via the Wall Street Journal. 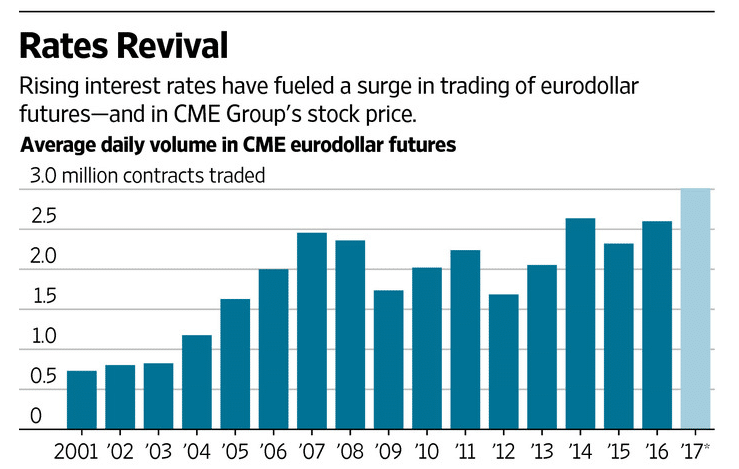 Eurodollars is the biggest futures market you’ve never heard of (no offense crude oil fanatics). Essentially, they are the cash settled futures contract whose price moves in response to the interest rate offered on US Dollar denominated deposits held in European banks. So it makes sense that in this current environment, we would be seeing higher daily volume in the Eurodollar. The June 2017 contract open interest is currently sitting at 1,515,000. That’s more than 3x bigger than trades on the fed funds. As we’ve explained before, it’s because it’s more affordable for a managed futures manager.

Imagine a professional commodity trading adviser who wishes to risk only 0.50% of a managed account’s equity on each trade he places. Well, if he has a minimum of $200,000 – he is willing to risk $1,000 per trade. Now imagine he uses a market’s 100 day Average True Range as the measure for risk in that market. Well, any market that moves, on average, more than $1,000 in a day will be eliminated from that manager’s possible markets. Popular energy, metals, currency, and stock index markets immediately get left out (and that’s why individually managed account minimums are usually in the $500k to $1 million range).

The structure of the EuroDollar, however – where the price of the futures contract is 100 minus the interest rate, creates a scenario where the price moves very little on average, with each move equal to a basis point move in the interest rate. Short term interest rates simply don’t move that dramatically in short spurts. So, your average daily range in the September EuroDollars over the past 100 days has only been 1.4 points, or $36. Our same fictitious trader can now do 27 EuroDollar contracts with his $1,000 risk budget. (that also explains why there is so much volume in EuroDollar futures, as managers need to do 5 to 25 times as many EuroDollar futures as they do markets like Crude Oil or a stock index market to equalize volatility based risk across different positions).

But if we take a step back from the trads themselves, the CME is loving the uptick in trading as it’s really the only source to trade these sort of contracts.

Research firm Tabb Group forecasts that 3.8 billion U.S. futures contracts will change hands in 2017, the fifth straight year of record volumes. Much of that growth will come from interest-rate futures, the volume of which is expected to grow 16% this year, a faster pace of growth than any other type of contract, Tabb says.

Other CME products—like energy and stock-market futures—are better known to the general public. But interest-rate contracts have been the firm’s biggest moneymaker for five of the past six years, responsible for around a third of the revenue CME collects in trading and clearing fees.

As interest rates continue to raise, it seems to be a win-win for the CME, traders, and for the markets themselves. What would be interesting is if Janet Yellen and the Fed decided to insert a little uncertainty back into the equation (say by raising rates by an entire 100 basis points, instead of the gradual build). Then we would really see some futures trades being slung around in attempts to either rush for the entrance or sprint to the exits.

For now, we’ll just slog along with the rest through another telegraphed, boring Fed announcement this week.