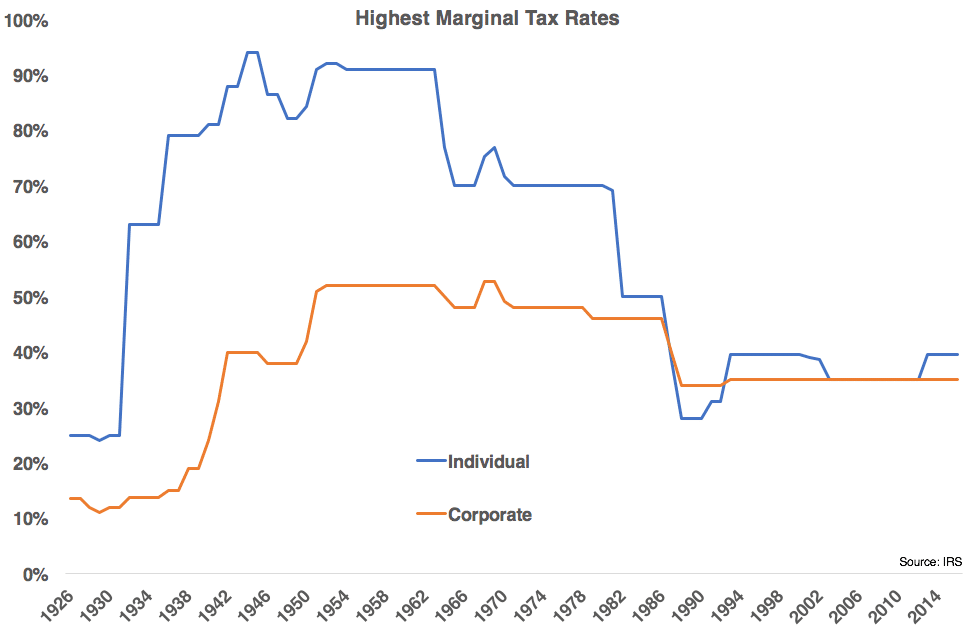 Before we get to that question, let’s look at the history of corporate and individual tax rates. The following graph shows the highest marginal tax rates for both individuals and corporations going back to the mid-1920s:

As someone who has always tried to invest from an evidence-based perspective, it became really difficult for me to deny how powerful trend and momentum were in the markets. In many ways, I already knew this but never figured out how to incorporate these ideas in my investment philosophy.

My Evolution on Asset Allocation – (A Wealth of Common Sense)

Maybe it’s just us – but we don’t think a “wait-and-see” approach bodes all that well for a portfolio when it comes to volatility.  It’s a little like trying to put on your seatbelt in the middle of the car crash. Over in the Alternative Investment space, we have a slightly different approach to dealing with volatility.

So that’s it America. Easy! Instead of buy-and-hold, it’s sell-vol-and-roll – what could possibly go wrong?

By putting some of their wealth in private ‘family offices,’ some billionaire managers are dividing their time, duplicating strategies and creating potential conflicts of interest

Trend following strategies have existed in various forms for over 100 years, and today’s style of diversified, rules-based trend following came to prominence during the inflationary 1970s.

President Donald Trump on Thursday will formally order an investigation into the effect of aluminum imports on US national security.

This chart shows how weekly incomes for workers 25 and older vary by education level, gender, and race/ethnicity.

The shape of income in America – (AXOIS)

The trend is clear. The new tech ruling class has already claimed its stake. But government? It’s wide open.

Millennials Will Aspire to Elected Office, Not Startups – (Bloomberg)