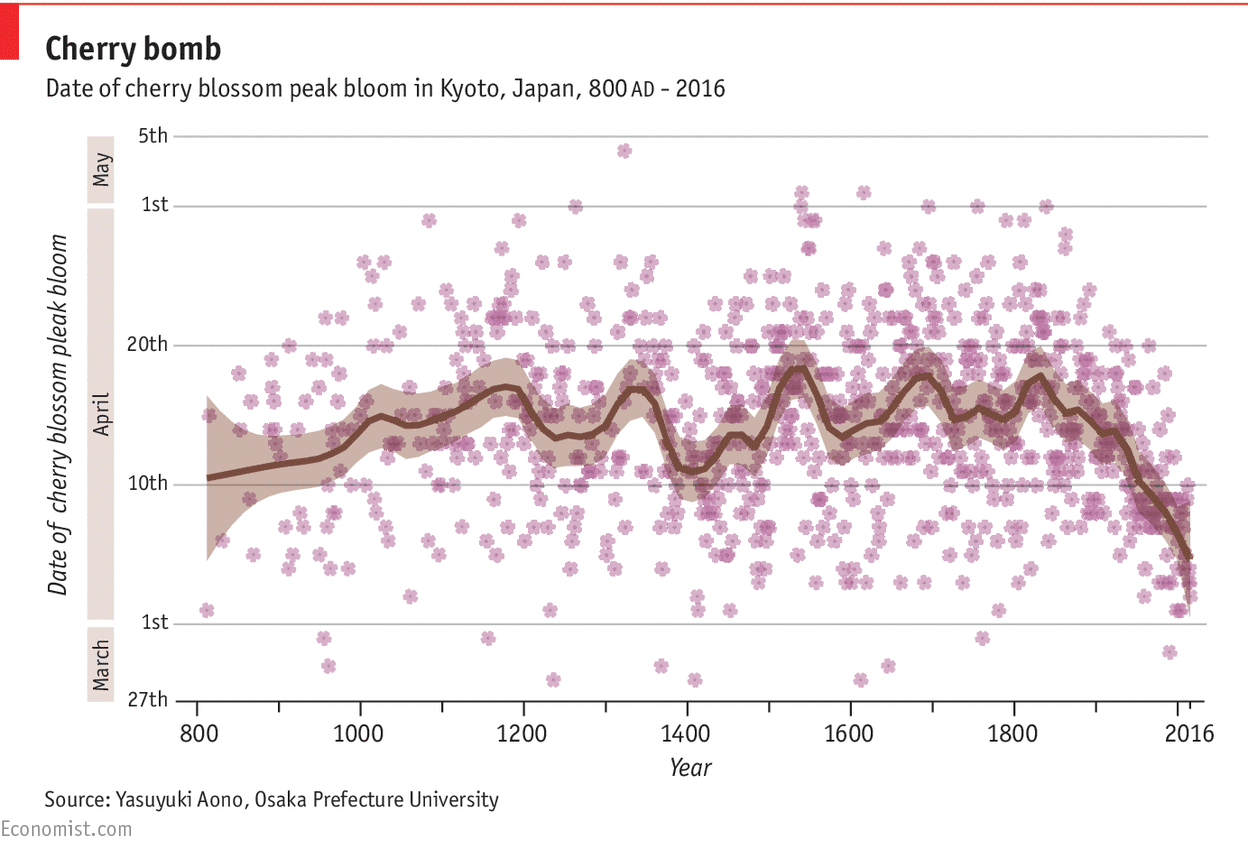 Since 1970, it has usually landed on April 7th, a difference of over two weeks. The cause is little mystery. In deciding when to show their shoots, cherry trees rely on temperatures in February and March. Yasuyuki Aono and Keiko Kazui, two Japanese scientists, have demonstrated that the full-blossom date for Kyoto’s cherry trees can predict March temperatures to within 0.1°C. A warmer planet makes for warmer Marches. The usual full-blooming date in Washington, DC, whose cherry-blossom festival is a relative newcomer (it launched in 1927), has also moved up by five days since the first recorded date in 1921.

If you’re using financial markets to take the pulse of the global economy, your chart’s telling you the patient’s ready to run a marathon while in need of a stint in the ICU at the same time.

It is well known that strong performance alone will not attract assets.  The firms that will be successful in growing their business are ones that stay highly focused on providing a top-quality offering, clearly articulate their firm’s differential advantages and have a highly professional sales and marketing strategy that deeply penetrates the market place.

Three tankers holding about 1.35 million barrels of gasoline and alkylate, an octane-boosting component blended with motor fuels, are drifting with no instructions for delivery.

Homeless Gasoline Tankers Are Drifting Around the Caribbean – (Bloomberg)

A key takeaway is that trend-following strategies based on price alone do a good job determining when to switch to defensive assets inside of recessions, but a poor job outside of recessions. If we have a means to judge when the economy is entering/exiting a recessionary period, we’ll know when to turn trend-following on/off. PE uses two key economic indicators that have been strongly predictive of past recessions to make that determination.

The Chicago City Council approved Rice’s flag design on the same day when the United States Senate voted for America to go to war in Europe. Not surprisingly, the news about the city flag was buried. The Tribune’s front page was filled with headlines about the war.

The local cultural center and bookstore Culture Stock is hosting the day of festivities, which will include transforming the city’s Water Street Mall into Diagon Alley—the famed shopping center of the novels where Harry buys his wand and school supplies. Look for vendors and crafting stations, including a broom-making booth:

Aurora Is Getting A Harry Potter Fan Festival This Summer – (Chicagoist)