The question everyone is asking it where does volatility go from here.  It’s at its lowest levels since the 1960’s, despite major economic unknowns like a looming government shutdown and a guy in the White House who was supposed to be all volatile, all the time. But each spike is met with “meh.”  Of course, the VIX itself doesn’t go back into the 60’s.  For that,  PIMCO released this chart – measuring volatility by the simple average of volatility of the top 100 current stocks in the S&P 500 – and their commentary: 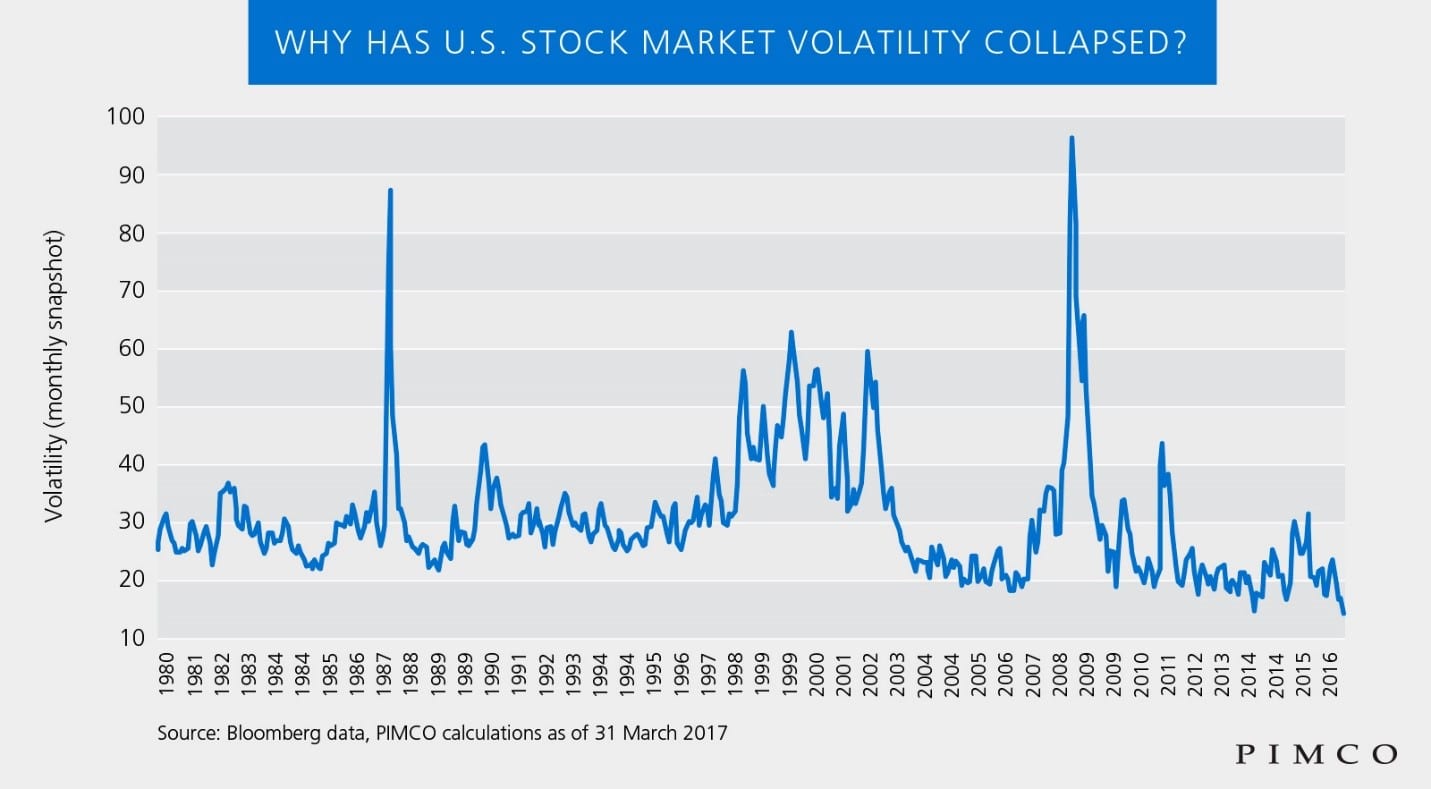 [what is] perplexing is how the drop in stock volatility coincides with increasing uncertainty about Washington’s policy agenda. Healthcare reform hit a roadblock and a tax code overhaul seems far away, as does a boost in infrastructure spending…. [and] we would note that earnings growth is the highest since the fourth quarter of 2011, [meaning] the bar is relatively high for companies [to beat].

The most likely explanation is that investors have taken a wait-and-see approach to substantive changes in fiscal policy. U.S. equity valuations are elevated but the probability of significant changes to fiscal policy is not zero, leaving stocks treading water. The result is low volatility and muted volume.

But we don’t expect this low-volatility regime to continue indefinitely (or maybe not even much longer)….U.S. stock volatility has collapsed, but we have reason to believe it will rise again – and perhaps by a lot.

A Game of Volatility Chicken

Maybe it’s just us – but we don’t think a “wait-and-see” approach bodes all that well for a portfolio when it comes to volatility.  It’s a little like trying to put on your seatbelt in the middle of the car crash. Over in the Alternative Investment space, we have a slightly different approach to dealing with volatility.  We look at it as a tradeable asset, going both long and short volatility, hedging it, creating stat arb strategies around it, and generally seeking out how to squeeze alpha out of the know unknowns index – the VIX.

You see, the VIX is much more than just an index quoted a few times a year these days. There’s actually a way to invest in these moves up and down through VIX Futures and Options, and the resulting ETFs tracking such. Instead of speculating, obsessing, and guessing when the volatility will hit, instead of waiting and seeing – investors are adding VIX strategies which seek to find alpha in and around all of the VIX’s interesting and unique movements.

It just so happens, we had three professional hedge fund managers (technically, commodity trading advisors since these are VIX futures) share how they view volatility as an investment opportunity, not just a fear gauge in a recent webinar. They aren’t just any hedge fund managers; these are three of the first professional traders to offer volatility focused investment programs to investors on a standalone basis using VIX futures and VIX options.

Here’s what you should know about VIX Futures and the people and systems that trade them professionally.

Is VIX a hedge or an alpha generator?

While most see the utility of VIX Futures as a means to hedge a portfolio – many of our panelists don’t view it as a hedge whatsoever. Mike Thompson of Typhon and Tim Jacobson both agreed that they see it mainly as an alpha generating tool, depending greatly on the market environment (ie. it’s not as simple as just buying or selling the VIX, a more sophisticated strategy needs to be used).

Tim Jacobson: “We run a portfolio for family offices – and we were looking for a driver that didn’t rely on the typical factors – because we felt like everything was being tied to the same return drivers. So, we were led to the volatility space, and an instrument, the VIX – that has unique properties to it. The structure of the VIX is something that’s very important to diversifying a portfolio.”

Brett Nelson, of Certeza stood the question on its head, asking the audience to think of the S&P 500 as a hedge of the VIX, not vice versa.

Creating Alpha, Spike or no Spike

Lots of people pay attention to the VIX when it spikes – and it seems short term traders only see to care about the spike. Brett explains that these types of strategies don’t need to wait around for a VIX move to find alpha.

“Brett Nelson: We may or may not catch the initial move – the thing about the spikes that make them so appealing in VIX is you don’t necessarily have to be waiting around for them to be generating Alpha. You have a strong theta effect – and hopefully you have a high sustained period of volatility afterwards that cause massive amounts of inefficiencies in the term structure. Those tend to produce the best stat-arbitrage environments.”

Increased Players in the Volatility Space

A quick look at VIX Futures over the past couple of years and it seems that the VIX spikes, and within hours it’s back at it’s same levels. Matt Thompson explained that this isn’t the way the market used to work. He thinks it has to do with the increased interest in short volatility selling.

What the mathematical reason that the VIX must mean revert over time:

Matt Thompson: Over the past couple of years – The VIX Futures market has matured to a two-way market. I think you see far more participants on the short side of the volatility trade. $XIV is a very popular exchange traded note, that is a pure example of a short vol trade. I think that you see that manifest itself in the spikes that we had – whether it was Brexit or the election. Volatility now can spike up – as much as it has to spike down. In the past, volatility has taken multiple weeks to come off that spike. Now, you’re seeing just as fast drawdowns as you are see draw-ups. I think the stability of VIX does create instability it the boat gets too loaded on one side of the trade. I think the true test of a mangers will be when we go through the next sustained period of high volatility, where the VIX is in a sustained period of backwardation – when they short trade stops being such a layup.

This is an important factor to consider, because it’s not just about the VIX, but the volatility of various industry groups. ZeroHedge points out this very lopsided boat issue seems to be happening in the market right now:

The VIX US large cap tech stocks is up 45% over the last month, versus the 13% rally in the VIX.  That’s the largest jump in sector VIX across the entire S&P 500 and speaks to market concerns over sector valuations, earnings power and how “crowded” that trade has become.

Hold on tight – we may be seeing the pop earlier rather than later.

Questions from the Audience

We received lots of questions throughout the webinar and one worth mentioning is how the VIX movement works. The Question was why does the VIX always mean revert?

Brett Nelson: You’ve got an instrument that cannot indefinably trend one direction, mathematically. It could stay at a higher lever for a sustained period. If someone were to say the mean of the VIX is somewhere around 15, it doesn’t have to revert to that 15 all the time. It can go down to 10 or below and it could hang around 20 for a while. But the idea that it would act like an equity index – that it would trend higher and higher with inflation and other market forces is mathematically impossible. We cannot be in a period where year after year after year, investors are bidding up the price of puts, because everyone would simply stop buying puts. It would no longer provide a protection for a portfolio.

These are just some of the many topics discussed in the webinar. If you want to hear their thoughts on volatility for the remainder of 2017 as well as how their strategies specifically look to capture returns, you can download a recording of the webinar here.