The Great ‘Buy the Dip’ / ‘Sell the Volatility’ Trade

We can’t stop thinking/talking/analyzing volatility, in what has become the defining trade of the past few years. As JPM’s quant Marko Kolanovic put it via ZeroHedge

You can see this clearly in track records like this emerging manager specializing in volatile, Aleph Strategies, who has managed to post positive returns in the first 15 months of their young track record.

What’s happening here?  Well, the general view is that ever since the enactment of the Bernanke Put, now known as the Yellen Put, which is essentially the Fed backstopping declines with more QE or promises of QE or other measures. – any retracement lower since the financial crisis has not only been short lived, but also getting ever more short lived.  As the chart below suggests, speed of recovery has been extremely quick, and getting quicker – since that grouping of orange dots in 2008. 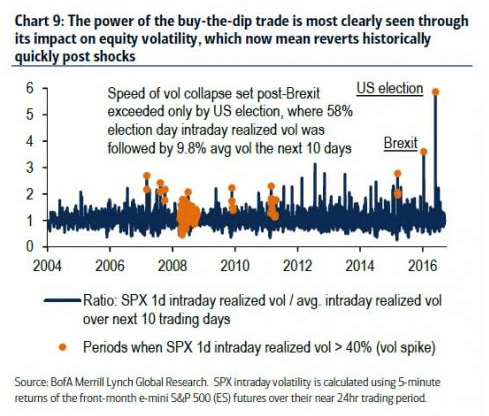 The billion dollar question is whether the volatility gets evaporated so quickly due to all the players in this trade, or if there are so many players in this space because the volatility is getting evaporated so quickly. If it’s the former – the low levels of volatility Option selling funds have that hypothetically been forced to sell could result in very low levels of premium/return with higher risk. The thing they are selling is getting cheaper and cheaper… all the while it’s going on sale for shorter and shorter time periods.

An alternate view of that – it’s the result of so many people selling vol – 104 days in a row where the S&P has not fallen more than 1%. The streak eventually ended at 110 days. 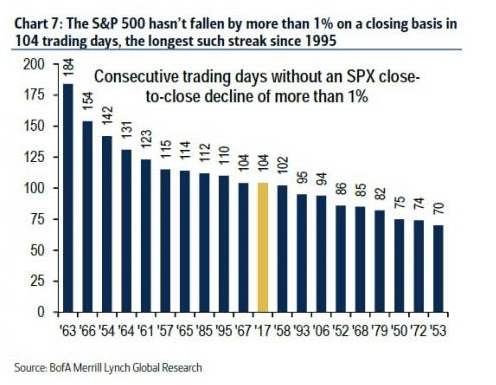 Will this low vol environment continue?  Here’s the aforementioned Aleph sharing their view:

Volatility is low due to Trump effect and positive outlook of the market. If Trump delivers [on his campaign promises] volatility will stay relatively low meaning that’s the “new normal”. If Trump doesn’t deliver on his promises internally and/or fails badly on foreign policy and/or reach the U.S. debt ceiling without support from his party to increase those limits, we expected to see an increase in volatility.

What is clear is that volatility can’t stay low forever and therefore an increase in volatility sooner or later is inevitable….

As we all know the real risk is not what we know and can predict, [but] rather the unexpected. Therefore, although we monitor carefully price action, technical analysis, news, implied volatility etc. We always assume a black swan event can happen at any day at any time without any prior warning.

You’ll excuse all the largest pension funds, asset allocators, asset managers and hedge funds mentioned earlier for currently doubting this take; they’re indeed betting against it in many ways with every ‘buy the dip’ they perform. But Aleph must have some charts that go back further than 2013? They must have some charts like the following, which show just how quickly, and high, volatility can spike when/if something comes along.

Historical Volatility on the S&P Futures going back to 1992 on a weekly chart. 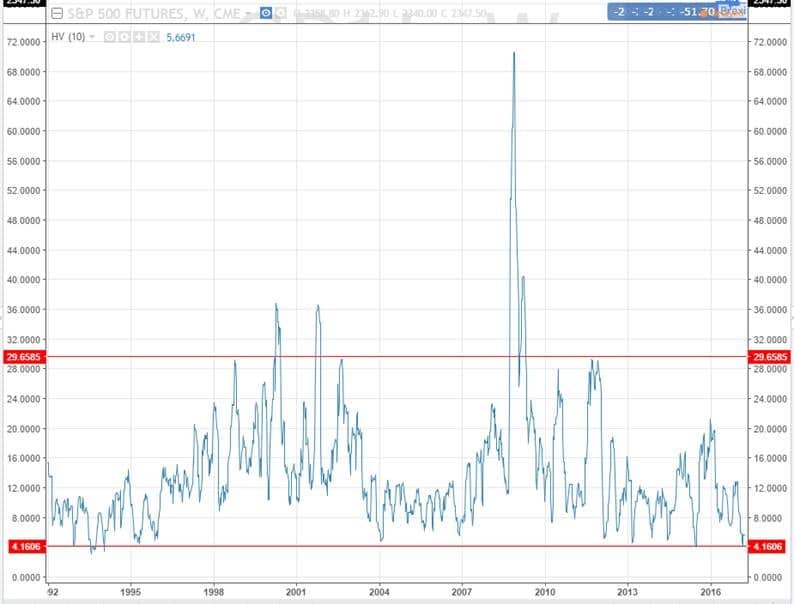 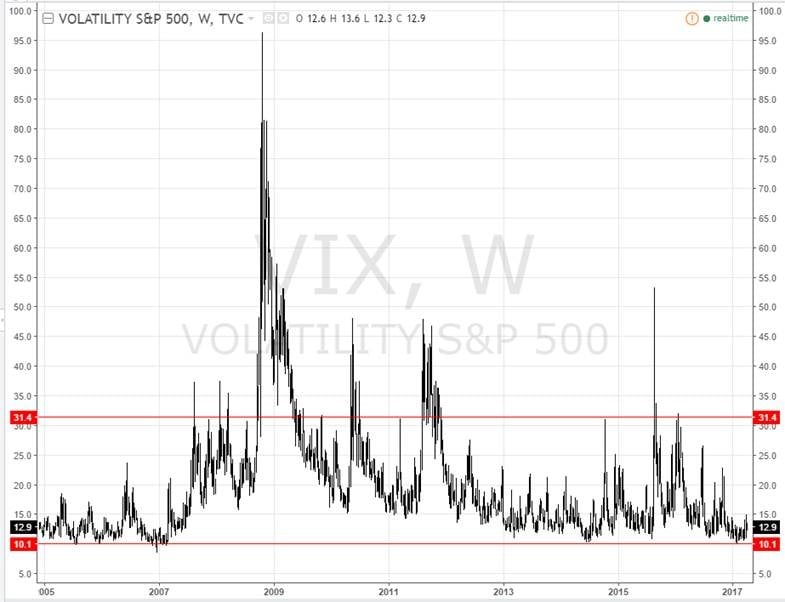 So what do say you?  Are we dampening the chance of volatility spikes with more and more entrants to the volatility selling game?  Or is the environment is what it is, and it’s just a mater of time before such a spike happen again?

Maybe these guys can shed some light on the debate.