How Will Trump Affect the Global Macro / Managed Futures World?

Today, we published our 2017 Managed Futures/Global Macro Outlook, and there’s one rather ‘in the news’ figure we couldn’t help but analyze given his penchant for market moving tweets and what not.

Yes, It seems leaders in the industry are thinking Trump could very well, “Make Discretionary Marco Great Again.” The thought process is Managed Futures and Global Macro styles should expect a rebound in 2017 behind increase volatility thanks for the newly elected president.

And we’re about to find out just how much a drastic shift in the executive branch can affect the markets. Some, none, a lot?  At best it’s a murky correlation between the President (any President) and the markets. The thought process is that pro-growth executive leadership leads to a strong economy, leading to strong GDP growth, leading to strong earnings, leading to strong stock markets returns. But it’s rarely that easy, is it? The reality of 2017 is sure to be a bit more nuanced and complicated than just Trump = unpredictable = volatility = good. For one, that view is a bit Americentrist. There’s plenty of other things happening in the world to pay attention to, from the Chinese economy to European elections to Syria to negative interest rates. And second, these are the known unknowns.

Here’s an excerpt from our Outlook on how Trump could help (and/or hurt) Managed Futures and Global Macro returns in 2017:

Before we go down this rather thorny rabbit hole, we can point at the incredible rally in equities since the election as evidence that political uncertainty does not necessarily equal market uncertainty. That being said, there’s really three “market/economy” camps right now. One, those scared to death of what’s going to happen. Two, those hoping Mr. Trump can make “it” happen and breathe further growth and profits into the US economy. And three, those who have no idea what’s going to happen.

No matter which of those three camps you pitch your tent in, the common denominator is the uncertainty in how and when it will happen. Can he push it through congress? Will his bluster cause trade wars? Can useful policy be crafted? There’s no doubt the end result (much less what might happen tomorrow or next week) is far from certain and that economic policy uncertainty in the US, and by extension elsewhere, is on the rise. Right on cue, Goldman Sachs was out with a piece analyzing this dynamic and its effects on return dispersions in the S&P 500. 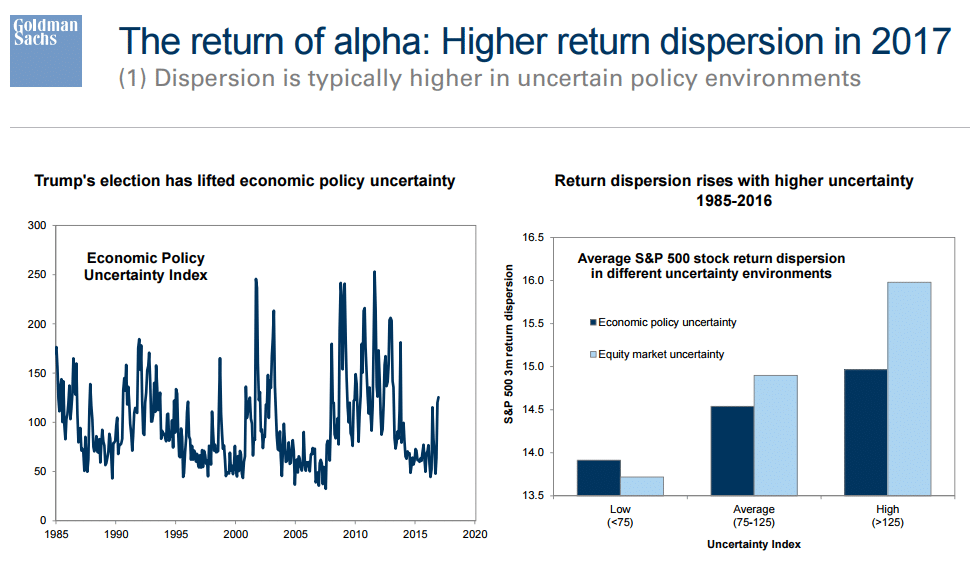 It’s not too surprising to see that the higher the economic policy uncertainty, the higher the equity market “dispersion” (chart on the right); and managed futures and global macro traders are looking at that rise into ‘high’ territory (over 125) in hopes of a more lasting expansion in market volatility; although it’s a bit surprising the reading is still well under the 2010-2013 levels. What does Trump need to say/do/undo to get that index to blow past those levels? Your guess is as good as ours, but whatever it is, it’s easy to imagine him saying/doing/undoing it…

The US exports 1 billion bushels of Soybeans to China every year, for example. What happens if a trade war puts that demand in jeopardy? Or if labeling China a currency manipulator causes them to stop buying US Treasuries? Speaking of currencies, check out a chart of the Mexican Peso lately to see what Trump can do to a foreign currency.

The idea is that Trump’s unpredictability is likely to lead to increased dispersion in returns across not just equities, but a whole host of markets spanning commodities, currencies, and interest rates. So what if dispersion rises? Who cares?

Well, we care because managed futures and global macro trading models appreciate greater market swings (and over longer time periods – notice the Goldman charts are tracking 3 month S&P return dispersion). Just look at what managed futures did when oil was range bound between $100 and $120 in 2012 and 2013 (flattish performance), versus what they did when Oil saw its “dispersion” in returns increase three-fold in 2014 (double digit performance) to get a feeling for what this looks like.

The jury is still out if Trump’s surprise events will lead to increased dispersion in a host of markets, but this unpredictability could also not create the market environments Managed Futures and Global Macro styles seek.

This is the king of quick tweets and unfiltered language, and that volatility producing style could just as easily produce the ‘bad’ kind of volatility as the good kind. He could say he’s banning all cocoa imports because he bit into the wrong piece in a box of chocolate; then announce a new chocolate statue initiative a few days later; whipsawing prices down then up and injuring systematic models which look to capture extensions of the initial moves.

But more seriously, Trump’s penchant for panache could easily (and unwittingly) create more of what we call binary events. We’re talking winner take all sort of market events like Brexit, the Trump vote, Swiss Frank depeg, and so forth which have plagued systematic trading models for much of the past few years. We’re talking ultimatums, deadlines, out of the blue directives, and so on which can spike markets quickly – with that spike not necessarily being the beginning of a secular move higher/lower.

Just go back to the Swiss Franc depeg event from the Euro as an example. The Swiss Franc moved more in just a few hours than it had in weeks. 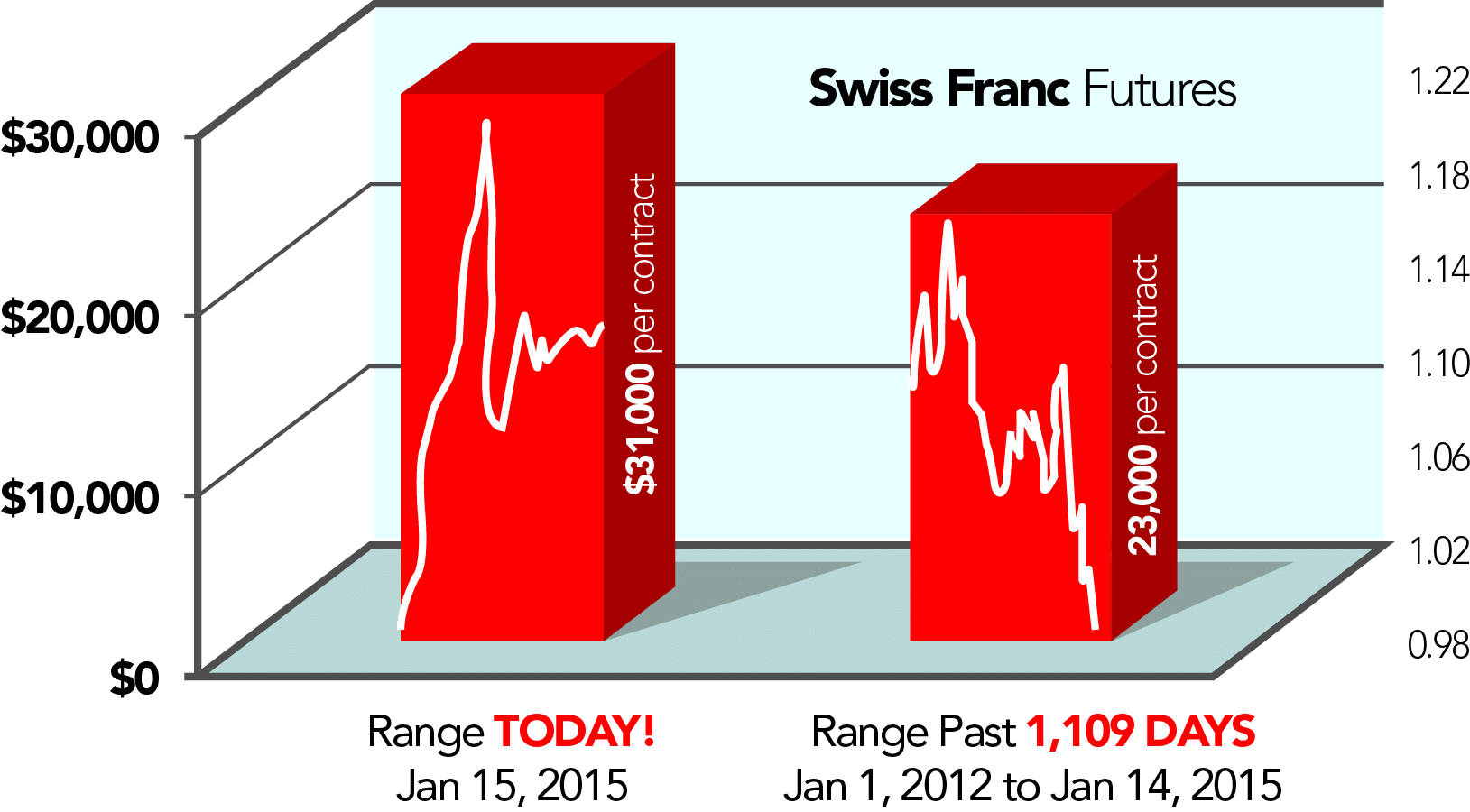 This is the pinnacle of frustration for systematic programs which are designed to capture outlier moves.

Here was the mother of all moves, but it wasn’t the type of outlier move they like. It’s easy to say, “hey, don’t be so picky.” But they’re designed to measure averages and ranges and model risk and reward based on previous patterns and data to identify potential outlier moves being generated over time. Oddly enough, they aren’t looking for the outlier move to happen all at once. The type of outlier moves they look for are more like combinations of normal moves pushing prices to new highs or lows.

Imagine flipping a coin. Systematic models are setup to capitalize on an outlier event such as the coin being flipped heads 20 times in a row, risking, say… $0.25 to earn $5.00 in profit (a quarter for every correct flip). The binary events are like changing the game, saying we’re going to risk $20 on the next coin flip, and then not play anymore.

The more ultimatums and deadlines we see out of Mr. Trump, the more binary market movement could become – with prices moving quickly to meet the new reality instead of building into a new reality over time. There’s also the unscientific contrarian take on this… if everybody’s expecting Trump to add “good volatility,” will it really happen that way?

Truly, Donald Trump is but a small factor that could tip the weights to create favorable markets for Managed Futures and Global Macro managers. For instance, there’s volatility expansion and contraction, a reversal in a multi-decade bond trend, a continued up-ward trend in the U.S. Dollar, and the potential for another trend to take place in the energy markets. Interested in finding out more? Download our newly published “Managed Futures 2017 Outlook,” which outlines four scenarios that could help Managed Futures and Global Macro styles and four scenarios that could hurt.